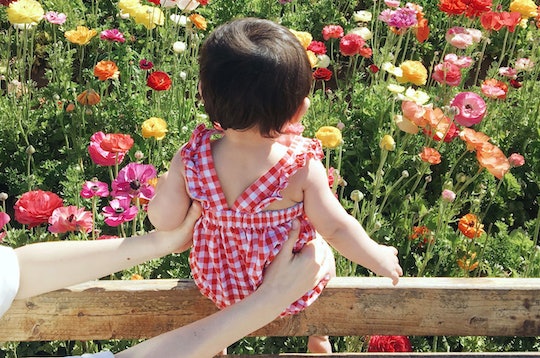 Mom Influencers Are Deciding What To Show Of Their Political Opinions

A side effect of social media is being confronted head-on with the opinions and values of our friends, many of whom we may not agree with. Most of us have heard that musty old rule of etiquette, “Never talk about religion or politics.” Where at one point you would have to reach a certain level of accquaintanceship with a person before discovering their feelings on issues like abortion, you now can suss out the naked truth of one’s core values simply by peeping their memes. If you are a lone soul not tethered too tightly to social media, you can mute, block, or drift away from the platform altogether when you encounter views that upset you. But if you’re an influencer or a blogger whose livelihood is tied to social media, you have to figure out how to tackle contentious topics when you know your beliefs might conflict with those of your followers. And this tight-rope walk has never been trickier than for mommy bloggers in a time where reproductive rights are being rolled back.

A bit over a month ago, popular mom blogger Ilana Wiles of Mommy Shorts, who has 164,000 followers on Instagram, posted a photo of herself standing under an umbrella, with a caption that read in part, “It’s a sad place we are in that people don’t trust women to do what’s right for our own bodies and wellbeing.”

I have been very vocal on social media about my opinions and as a result, I have gotten a lot of support and a predictable backlash.

The post was flooded with comments from those who agreed and disagreed with her. She later wrote on her blog about her decision to be vocal about her position as pro-choice. In an entry titled “Why I Will Continue to Voice My Pro-Choice Position,” she wrote “I have been very vocal on social media about my opinions and as a result, I have gotten a lot of support and a predictable backlash. For the record, people who unfollow me based on my beliefs are not my people. I do not miss them and I do not want them. But I do believe there are a lot of nuances to these discussions and I have appreciated reading comments from a few followers who say their opinions are evolving as the motivations of those behind the new laws become clearer.”

Her decision to share her own thoughts has also led to her receiving messages from those who aren’t often exposed to this perspective, being from a community of people who hold a different viewpoint. In that same post Wiles writes “I have gotten many direct messages over the years from women (mainly younger) who have told me that reading my thoughts has helped them formulate their own opinions, which might be different from their families, their churches or immediate communities.”

I find it’s extremely important to leave my comments open for respectful dialogue because that’s where the hard work of changing minds is done.

Popular mom blogger and author Mary Katherine Backstrom has also had positive experiences engaging with dissenting commenters. On her wildly successful Facebook page, she discusses her experience of motherhood, as well as other important topics such as gun control and LGBTQ rights. She firmly believes in the healing potential of engaging with those who have different values. “We can’t forget that the other half of America are our fellow countrymen,” Backstrom tells me. “We are losing our ability to find one another, or even attempt to meet one another, or my Lord, HEAR one another."

Although airing her values may lose her followers, Backstrom remains unfazed and encourages respectful conversation in her comments. “I find it’s extremely important to leave my comments open for respectful dialogue because that’s where the hard work of changing minds is done,” she says. She touches on her rationale behind engaging with negative comments. "I know people aren’t just commenting, they are scanning the comments for people who are thinking and asking what they are," she explains. "Discourse always has an exponential reach. And if it’s respectful, it has exponential healing power."

The choosing of sides by mommy bloggers is a microcosm of earlier pressure for Taylor Swift to reveal her political opinions, and possibly risk alienating her country music-loving base in the process, the logic at the time went. She did come out as supporting a Democrat in a Tennessee race, and although she received some criticism and sparked speculation of it being a career-ending move, her career certainly seems to be thriving regardless.

In the Instagram post from 2018 where she stated her support for Democratic candidates, she explained, “In the past I’ve been reluctant to publicly voice my political opinions, but due to several events in my life and in the world in the past two years, I feel very differently about that now. I always have and always will cast my vote based on which candidate will protect and fight for the human rights I believe we all deserve in this country.” Most recently, Swift told Elle that she intends to keep using her platform to speak up on issues that are important to her, stating "I'm finding my voice in terms of politics."

In social psychology, the behavior of groups has been studied extensively and taught us a lot about the way we see other people and the way we view ourselves. There’s a natural tendency to order ourselves into groups we identify with and groups we consider to be outsiders. This opens the doors for us to form certain biases that do nothing more than further skew our perceptions.

Whether we like it or not, social media has an influence on the social and emotional landscape of our lives.

In a post he wrote for the New York Times about disconnecting from social media’s role in the dissemination of news, columnist Farhad Manjoo wrote that, “Technology allows us to burrow into echo chambers, exacerbating misinformation and polarization and softening up society for propaganda.” This can certainly occur on a personal level when we actively work to limit our exposure to dissenting points of view.

The social science suggests that curating our sphere to only include opinions that are similar to ours is a dangerous step towards dehumanizing people that don’t share our views. It’s incredibly easy to say that all “X” are “Y,” but the truth is much more complex.

Whether we like it or not, social media has an influence on the social and emotional landscape of our lives, both online and off. The lessons of this moment are that when content creators choose to share their values at the risk of ruffling some feathers, their influence allows them to host a discourse that, if approached correctly, may ultimately help bring people closer together.