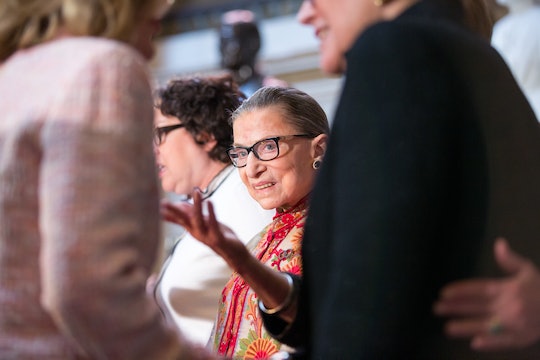 RBG's Comments On Motherhood Are So Important

There is a prevalent myth, even in the most intersectional feminist circles, that having a child makes pursuing a career almost impossible. And let's just be real — it does, in a way. Having a child to care for makes it more difficult to pursue grad school or dig into a career path. Just like growing up in a failing schooling district makes it harder to get into college, showing up for a day job makes it harder to finish a degree, or caring for an elderly parent makes it hard to get promoted in your dream grown-up job. Managing all of those duties (and they are duties, in many cases, at the end of the day) is not impossible. It's just the hard truth. There are upsides, of course. Like this week, when Supreme Court Justice Ruth Bader Ginsburg said that motherhood helped her get through law school.

Let's all give a round of applause to Ginsburg for sharing her story and telling The Atlantic that the birth of her daughter helped her with time management. "I attributed my success in law school largely to Jane. I went to class at 8:30 a.m., and I came home at 4:00 p.m., that was children’s hour," she said. "It was a total break in my day, and children’s hour lasted until Jane went to sleep. Then I was happy to go back to the books, so I felt each part of my life made me rested from the other," she added.

It makes sense. Does anyone else feel like when they are technically "too busy," they finish tasks and work and meet deadlines a little bit better than when there are no deadlines at all, no kids on hand, and hours of Bravo marathons to watch? When you have your own deadlines and appointments to commit to, along with a school and "meal schedule" — what my full-time working mother lovingly used to call "dinner time"— it strangely makes it all a little easier to handle. In some ways, the busier you are, the less time there is for wasting. That was, apparently, Ginsburg's message in her most recent interview about her life.

Don't get me wrong, what Ginsburg said was sweet and hardcore. She managed her education, career path, and looked forward to time with her daughter. All while attending the top law schools in the country in the 1950s. I would bow down. A bit.

Ginsburg attended Harvard and Columbia, and eventually graduated from the latter in 1959, after having served on the law review at both institutions. That means she was as plugged into school and her law career as she was her family life. She was, and is, badass. It's notable as well that, in her recollection of being a mother in law school, Ginsburg credited her husband for acknowledging the wage and career gap at the time and picking up the slack while she was busy editing law articles and getting nominated to even bigger offices.

Ginsburg said in the interview that while she was busy making a name for herself as a lawyer and founding the American Civil Liberties Union's Women’s Rights Project in 1972, her husband, Martin, “took over the kitchen entirely, and I was phased out of it, to the everlasting appreciation of my children."

Listening to Ginsburg's interview with The Atlantic, it's hard to not to think about the character Jane Villanueva, of Jane The Virgin. In case you don't watch, bear with me: Jane, a smart, motivated woman, becomes inexplicably pregnant, falls in love, and still manages some great career options as a writer, of all things, while making intricate calendars that she plasters on her walls so she meets her goals, despite having a child. The message of both the satirical telenovela and the Supreme Court justice's parenting reflections is the same: You can succeed despite a child, if you have a support system, like Ginsburg's husband, Martin, or fictional Jane's abuela, who helps, no matter what.

Of course, that's a fantasy land for some parents. And when powerful women like Ginsburg make it sound easy, it's a kick in the face to women who are doing it all alone (even though it's not intended to be).

There is no doubt that women and mothers can kick ass in their career and be great mothers. But the fact that a televised CW character and a current Supreme Court Justice have more in common than most "regular" women —who are more likely frantically roaming the supermarket aisles just before closing time on their way home from work rather than holding an all-nighter on a Supreme Court case or finishing a thesis — is evidence that the gulf between success for a woman and her male counterpart is just as wide as it used to be.

It's also jarring to hear Ginsburg say that having a child during her law school days was easy when right now, women all over America are plagued with higher education debt, housing debt, or even healthcare costs just to get pregnant in the first place. Ginsburg's words about following through with her career dreams are inspiring, but also aren't much comfort to women who have a law school's (or any school's) tuition, to pay at the end of the month, along with child care, grocery bills, and no support system to fall back upon.

Let's all hope that in these crazy, political times, Ginsburg can also remind society of that fact as well.