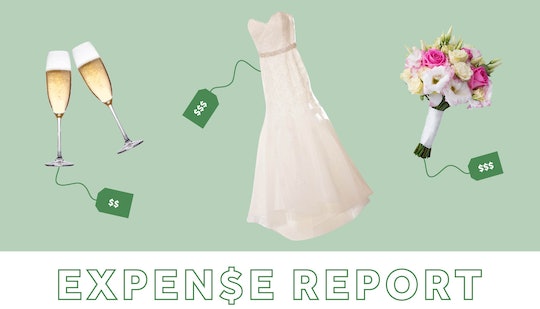 Ask people how much a wedding costs, and prepare to feel your blood pressure rise. This family, who got married after having a child, spent more than they earn in a year. As told to Gianluca Russo.

As if planning a wedding wasn’t hectic enough, doing so after already having children is a whole new level of stress. That was the case for Taylor Apuzzo and husband JP whose daughter, Coraline, was 2-years-old when they tied the knot. Financially, there was a lot to think about. Thankfully, the couple’s parents were able to assist them in paying for the wedding, allowing them to have more wiggle room — though there was no way they were having a $200,000 wedding like some of their friends, Apuzzo explained to Romper via phone. Still, though, with a tiny human at home, special considerations needed to be made. As told to Gianluca Russo.

Family: A mom and dad in their twenties

Number of children: One (age 2)

I was a fashion major, so I definitely had ideas of what type of stuff I would like... but I didn’t really know if I was going to get married. Not only did we plan it with a child, but we also planned it from a state far away, so I really had to work around when she was not in daycare to be able to come up to Massachusetts and do wedding stuff. She was also in dance and ballet where we lived in New York, so she had a dance recital at the end of May and we were getting married in July, so there was a lot of moving parts to it that obviously, had we not had children we wouldn’t have had to consider. But I wasn’t going to not have my child do activities because I had stuff going on.

We had a solid budget and we blew it out of the water. Originally our budget was between $35,000 and $40,000. There are things that, maybe if we didn’t have to worry about our child’s finances, we would have added or done differently, but I think that it kinds of put it into perspective what was really important, what we really wanted to spend money on. Obviously, it’s very easy to get carried away. All of that definitely comes into play when you’re planning a wedding and you have children because you’re thinking of all the things that come out of the wedding and after the fact and what can be reused.

[The wedding day] was really hard for her. It was about 110 degrees out, which comes into play when you have children involved. There’s a lot of things that you worry about having her there.

[Our parents assisted a lot financially] but we did put some of our own money into it as well and that was kind of where we had to decide what... was worth it because obviously we didn’t have the luxury of just, ‘Oh, we’ll just do this and figure it out later,” because there was a small human at home who had to eat.

We got married on the cape in the summer, so we knew anywhere that was [what we were looking for] was going to be expensive. We did a Friday night wedding to try and save some money. Also, knowing that my husband is a chef, there was no way around that unless he was cooking the food himself which was impossible. That’s where the bulk of our money had to go because he wouldn’t had been happy and then what’s the whole point? That was #1. So we basically did not skimp on the food and from there, we budgeted kind of accordingly.

I’m a flower person: Originally my flower budget was about half of what we spent. I was really surprised about how expensive the flowers were. Now that I’m an adult and now that I know, I get it, [but] I still think flowers are overpriced because they die. I really, really shopped and kind of made up my mind about how I wanted the flowers to look. So once I envisioned it in my head and saw the price, it was really hard for me to cut back there. So [to cut overall costs], we didn’t have a videographer. We had a friend who had a GoPro at the time film stuff and we tried to do things that way. We didn’t have a photo booth or [extra] things like that.

[Looking back], I probably would have found a less expensive dress and I would have gotten a real videographer [instead]. Being the fact that my daughter was there and my grandmother who passed away was there, I wish I had some of those memories between the two of them specially captured because that’s something a lot of people don’t get to experience. Now that she’s six and she doesn’t really remember the wedding so much, because she was only two, I wish I had videos to show her.

Looking at these numbers makes me wonder how big of a house we could have bought if we skipped the wedding!

This interview has been edited for clarity.

More Like This
How Do I Rediscover My Sexuality When I’m Completely Touched Out?
30 Easy Summer Activities For Kids That Work Rain Or Shine
Here's How To Explain Fourth Of July To Your Kid
The Covid Vaccine For Kids Under 5 Has Been Sent To The FDA For Review