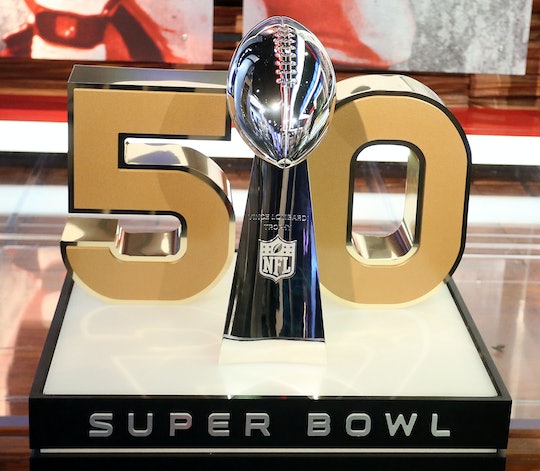 How Much Are Super Bowl Tickets? They're A Serious Investment

For fans of the Carolina Panthers and the Denver Broncos, going to the big game is an investment. Just how much are Super Bowl tickets? According to CNN Money, tickets resold on SeatGeek average $5,178. And — shockingly — that price tag won't stop people from seeing the game live.

It may be easier to make a student loan payment than pay for a Super Bowl seat, but fans are still buying. CNN Money reported that one pair of tickets cost $24,200 (that's $12,100 each). It's the most expensive buy yet, but the rush to snag a seat isn't over. Since Boston-area buyers snapped up about 14 percent of tickets, disappointed Patriots fans may be reselling.

Super Bowl 50 is Feb. 7 at 3:25 p.m. Fans who can't afford to spend Super Bowl Sunday munching on cheesy fries in Santa Clara's Levi’s Stadium can still head out to San Francisco for a football-themed weekend. According to the Host Committee's website, public events will make the festivities accessible to everyone. The NFL Experience at San Francisco's Moscone Center is a theme park packed with opportunities to get a full football immersion experience. Fans of all ages can meet players, test their athletic skills, and even take a photo with the Vince Lombardi Trophy. Kids can stretch their legs in the NFL PLAY 60 Zone before snagging a souvenir from the NFL SHOP.

Also open Jan. 30 through Feb. 7 is Super Bowl City presented by Verizon. The fan village is located on the Embarcadero, offering plenty of free family-friendly activities. Nosh on delicious San Francisco eats, catch performances, and browse technology in the Fan Energy Zone presented by SAP. Stop by at the right time, and you might even catch part of an NFL broadcast.

This year's Super Bowl pits two powerful teams against each other. According to CNN, the Carolina Panthers beat the Arizona Cardinals 49 to 15 to win the NFC Championship at home in Charlotte. So far this year, the Panthers have only lost one game (to the Atlanta Falcons in December). The Broncos earned a win against reigning Super Bowl champions the New England Patriots, beating them 20 to 18 in Denver. CBS reported that the Super Bowl may be Peyton Manning's last game as a quarterback.

Even if you're not springing for Super Bowl tickets, there's still plenty of football fun to be had. Whether you'll be strolling the celebration in San Francisco or kicking back with a plate of nachos on the couch, Super Bowl 50 is still going to be a blast.