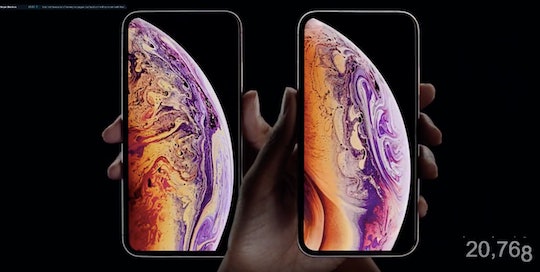 Here's How Much The Newest iPhones Will Cost

After almost a year since the iPhone X was released, Apple has come through with yet another new smartphone model. Tech geeks, Apple fans, and even regular people who just need a new phone, have been awaiting this day in eager anticipation. Apple products aren't known for being cheap, though, and many are curious: how much are the new iPhones?

Rumors swirled around the internet as people debated what Apple would name its next batch of phones. Following what seemed to be the naming pattern, some people guessed that Apple's latest phone, released after the iPhone X, would be called "iPhone XS Plus."

Early on Sep. 12, Apple shared the names for its newest products on its own website: iPhone XS, XS Max, and XR. This means Apple has revealed not just one, but three new iPhone models.

A leak of the new phones came ahead of Apple's annual Keynote, but it definitely didn't spoil any of the hype. The keynote took place at the Steve Jobs Theater at the Apple HQ in Cupertino, California, as reported by Macworld. Apple has multiple keynotes throughout the year but, as Macworld noted, the Sep. 12 event was meant to focus on iPhone releases — and it did not disappoint.

The iPhone XS will begin retailing at $999; the iPhone XS Max at $1,099. However, it seems these prices only apply to the 64GB model, meaning prices will increase if users want more GBs.

One Twitter user shared an image from the Apple keynote, showing the iPhone XS Max, with text detailing the memory options: 64GB, 256GB, or 512GB. "I'm very curious what the 512GB model will cost," the user tweeted.

A second user shared an image of Apple's full iPhone line up, from the iPhone 7 up to the Max.

So, what sets the new iPhones apart from previous models and each other?

The iPhone XS and Max are virtually the same phone, according to CNET, only in different sizes. The iPhone XS sports a 5.8 inch screen in comparison to the Max, whose screen comes in at 6.5 inches, as reported by CNET.

The Max broke records as the first iPhone to retail for more than $1,000, according to CNN's live updates. Apple's iPhone X, its newest model before these releases, marketed for $999 at its highest price point.

For those searching for many of the same tools of top-tier iPhones without the high price, it's the new iPhone XR that might catch your eye. As noted by CNet, the iPhone XR is Apple's attempt at folding a "bargain" iPhone into the X-family.

The iPhone XR is 6.1 inches and comes in a wide variety of colors, such as white, black, blue, coral, and red, according to CNN. Similar to the rest of the X-family, the iPhone XR does not have a home button and is activated by swiping.

Apple's release of the iPhone XS, iPhone XS Max, and the iPhone XR has seemed to impress. Although some users are still struggling with changes like the lack of home buttons, the wide range of price points may help to soothe them.