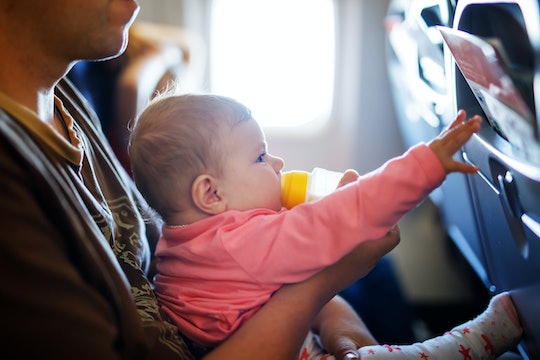 How Much Breast Milk Can You Bring On A Plane? Because 3.4 Ounces Isn't Enough

Traveling with a baby is intimidating to say the least. You have to worry about changing a diaper in a tiny plane bathroom, how you'll keep your little one entertained for the duration of the ride, and receiving dirty looks from strangers if your kiddo cries on top of it all. Luckily, you won't have to worry about pumping at the airport since you can bring bottles, but you'll want to know how much breast milk is allowed on a plane before you head to the airport.

It's important to look into Transportation Security Administration (TSA) rules about breast milk on planes, as you can typically only bring 3.4 ounces of liquid in your carry on luggage during air travel. The stipulation is why you stock up on mini shampoo and toothpaste every time you take a trip, and it would be natural to assume the same rule applies to breast milk. But you can actually bring more breast milk than you can other liquids, because even the TSA understands that kids gotta eat. (And that a hungry baby will make everyone unhappy.)

As listed on the "Traveling With Children" page, you're permitted to bring breast milk, as well as formula, juice, and baby food, in "reasonable quantities" through airport security, though they will be subject to additional TSA screenings since they'll be in larger containers. Romper reached out to TSA about what exactly reasonable quantities means, and a rep explained via email that "although TSA does not specifically limit the amount of breast milk you may bring, the amount should be reasonable and consistent with your itinerary." So the number of bottles you're allowed to bring might be less if your flight is two hours as compared to eight, but TSA will ensure you're able to bring enough supplies to fulfill your baby's needs. This informational video will give you a better idea on how your trip through security with your baby will go.

As the video indicates, no matter how many bottles you decide to bring, you should remove them from your baby bag and let the TSA agent know you have breast milk (or juice or formula) with you once you reach security so they can separate the bottles for the additional screening. They'll most likely be examined via x-ray (which won't hurt the milk, according to the TSA), and then returned to you. It's possible the officers will ask you to open the bottles or separate the liquid into smaller containers if you have them, though they'll still be returned to you.

You can also pack everything you need to keep your kiddo's drinks cold in your carry on bag, like freezer or frozen gel packs, though they may also may need further examination from TSA. But the moral of the story is that you don't have to change what your kid eats just because you're taking a plane ride. If you're about to travel with your baby for the first time, the TSA Traveling With Children page is a great resource to help you prep for the trip. It might be stressful to travel with a baby for some reason, but breast milk won't be it.

More Like This
25 Winter Solstice Baby Names For Your Magical Little One
40 Lovely, Lively, Lavish Girls Names That Begin With “L”
Baby Growth Spurts: When They Happen & What To Expect
41 Strong & Sweet Baby Boy Names That Start With “K”