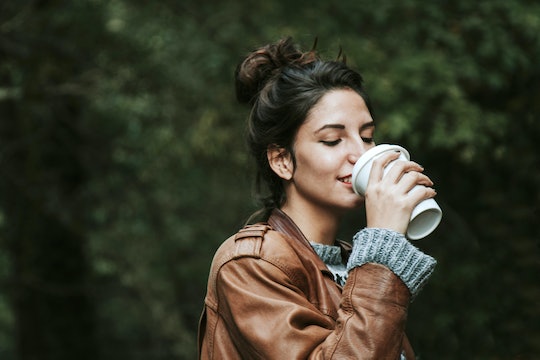 When you become pregnant, you're life changes. All of a sudden, you have a laundry lists of things to do to prepare for your baby, and one of those things is watching what you eat and drink. If you frequent the nearest Starbucks, the you might be wondering how pregnancy changes your caffeine intake. In fact, you may want even more caffeine since pregnancy can make you tired. But is it a good idea? Just how much caffeine can you have in the first trimester when your baby is still growing.

According to the Mayo Clinic, caffeine is one of the foods to avoid or minimize consumption on during your pregnancy. The reasons being that caffeine can cross the placenta, although the full effects this has on your baby aren’t clear. Typically, your health care provider will recommend having no more than 200 milligrams a day of caffeine during the duration of your pregnancy. That means having no more than two 8-ounce cups of coffee, four 8-ounce cups of brewed tea, or six 12-ounce cups of soda a day.

Although your doctor might prefer you to stop drinking caffeinated beverages all together, the truth is that there is an amount of caffeine that you can safely drink during pregnancy, according to Parents.

"Caffeine in pregnancy can be an issue if large amounts are consumed," OB-GYN Dr. Michele Hakakha told Parents. "We know from many of our studies that caffeine crosses the placenta, and a baby's developing metabolism can't quite handle the caffeine jolt."

Although many doctors and experts from the American College of Obstetricians and Gynecologists agree that pregnant women should drink under 200 milligrams of caffeine to be safe, it turns out that this number is actually a bit arbitrary, according to the aforementioned Parents article.

This does not mean, however, that you shouldn't heed your doctor's warnings about caffeine consumption during the first trimester of pregnancy and beyond. The problem with finding evidence-based medicine is that not many moms-to-be are willing to submit their unborn children to be guinea pigs, so any studies on pregnant women tend to be retrospective studies, according to the aforementioned Parents article.

"If a mom-to-be had an adverse outcome like a miscarriage, she always likes to blame it on something," OB-GYN Dr. David Elmer told Parents. "So she'll often overestimate her coffee usage."

For moms who hear conflicting information about caffeine consumption during pregnancy, the better-safe-than-sorry rule may apply. According to Fit Pregnancy, expectant mothers need to educate themselves about the amount of caffeine present in each drink. Since coffee tends to make some pregnant women queasy, you can also look into alternatives to your morning caffeine fix.

"I would personally suggest to a woman experiencing acid reflux, which is common at the latter stages of pregnancy, to avoid coffee and try green tea," Kathleen Love, an integrative nutrition counselor and doula, told Fit Pregnancy.

You can also try chocolate, which has both caffeine and minerals such as magnesium, which helps regulate muscle relaxation, Love said. However, moms-to-be should take care to avoid the not-so-great caffeine choices like soda and energy drinks.

Instead, make sure that you get plenty of sleep during your pregnancy so that you don't need to boost your energy daily. You can also try having some natural energy boosters, such as sugars in the form of fresh or dry fruit, which also provide energy well, Love told Fit Pregnancy.

"Dates, cooked apples with cinnamon, banana, mango or pineapple are all good choices as they pack a punch in the nutrient and fiber department," Love said.

Pregnant women should also remember to pair their caffeine choices with plenty of water, since caffeine is a diuretic that can lead to dehydration. However, if you are keeping your caffeine consumption under 200 milligrams of caffeine, making sure to drink plenty of water, and are listening to your doctor's recommendations, then you should continue to have a safe pregnancy. Of course, if you want to fully avoid caffeine in an effort to be better-safe-than-sorry, then more power to you.