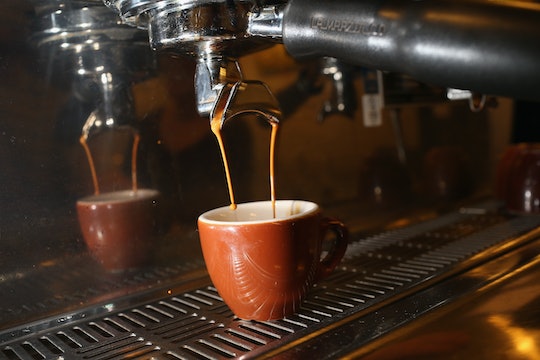 It's no secret that parents want to see their kids happy. While playing with puppies, going to see a new movie, or getting a new toy can definitely bring joy to a child's face, sometimes they want something else. Perhaps an extra scoop of chocolate ice cream, or maybe even a sip of that soda you've been drinking. And even though a small amount of sugar or caffeine is somewhat okay for your little ones, there is definitely such a thing as too much. But knowing just how much is too much can be tricky. So, how much caffeine is safe for kids? One child's recent death has sparked questions about the stimulants our children have access to.

The unexpected death of 16-year-old South Carolina teen Davis Allen Cripe — who died after consuming "three caffeine-laced drinks -- a cafe latte, large Diet Mountain Dew and an energy drink -- in a two-hour period," according to CNN — has caused many to wonder just how much caffeine our bodies can handle. In particular, how much caffeine can younger, smaller bodies handle?

It turns out that, while there's no exact formula for knowing when to cut your child off from coke or a Pumpkin Spice latte, there are some guidelines. Most experts agree that children under the age of 12 shouldn't have any caffeine at all, but obviously that's easier said than done. According to LiveScience, if your kids must have something caffeinated, here are some general rules to follow, in terms of just how much is safe for each age group:

Cripe was 16 when he died, and had likely unknowingly consumed far more caffeine than was healthy for a teen his age. According to a report by the local coroner, the three loaded beverages Cripe had ingested likely prompted a "caffeine-induced cardiac event causing a probable arrhythmia," leading Cripe to "collaps[e] in his classroom."

While teaching your children to stay away from highly-caffeinated beverages may sound relatively easy, the popularity of drinks such as Red Bull, Diet Coke, and basically anything from Starbucks makes it increasingly difficult to determine what beverages are safe in higher quantities or for certain age groups (for adults, in moderation, all those beverages are just fine of course). Compounding the problem is that fact that kids don't often understand health guidelines or, for the younger ones, can't practice much self-control just yet.

Caffeinated beverages are usually a harmless treat and can give adults and older teens a welcome boost of energy throughout the day — but for growing children with much smaller bodies, it's safer to steer clear or at least keep a very close eye on what, exactly, they're consuming.