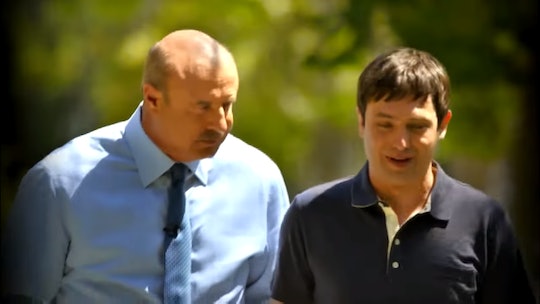 How Much Did Burke Ramsey Get Paid For His Dr. Phil Interview? The Exact Number Is Unknown

The first of three episodes of Dr. Phil dedicated to an in-depth interview with JonBenét Ramsey's older brother aired on Monday night, and viewers might be wondering what, if anything, Dr. Phil paid Burke Ramsey for his appearance. Both ABC News and The Hollywood Reporter have reported that Burke was compensated for his time, but there's been no official statement. Romper reached out to both CBS spokespersons and Burke's representation for comment on the reported sum, but did not immediately receive a reply.

While it might seem off-putting that Burke "cashed in" on the interview, Dr. Phil told a Boulder, Colorado CBS affiliate that he spent two full days with Burke. It seems only fair that he'd receive some compensation; This is time that Burke could have otherwise spent working, vacationing, or any other activity besides rehashing his sister's murder with a TV psychologist.

Paying for interviews wouldn't be unheard of, either. In 2011, People reported that Dr. Phil paid a fee to Caylee's Fund in order to secure an interview with George and Cindy Anthony, the grandparents of murdered Florida toddler Caylee Anthony. The Orlando Sentinel puts that figure at $600,000, according to a print article from People. And why wouldn't he pay? This new Burke Ramsey interview promises huge ratings; It's on my DVR right now, and I've never watched an episode of Dr. Phil in my life, just to give you an idea of how excited people are to hear Burke's story.

Burke was just 9 years old when the body of his 6-year-old sister, JonBenét, was found in the family's basement on Dec. 26, 1996. The media attention surrounding the case would have been overwhelming for anyone, but particularly for a child, and being shielded from the press for the majority of his childhood led to Burke growing up fairly isolated. On The Today Show, Dr. Phil revealed that Burke, now grown, works remotely, and his self-imposed exile, combined with his upbringing, have contributed to Burke becoming "a very socially awkward young man." Burke reportedly smiled and laughed throughout his interview, even while discussing gruesome topics. "He has not had the social contact that most kids have growing up," Dr. Phil claimed, as a means of explaining Burke's behavior.

For his part, Burke's attorney, L. Lin Wood, has stated to Romper previously that rehashing any rumors that his client was involved in the incident, especially for publicity or media gain, would be "unconscionable."

"Any statement conveying that this young man was involved in the brutal murder of his sister — his life's best friend — is unquestionable false and defamatory," Wood stated. "Conveying this false accusation for TV ratings is unconscionable and will result in litigation in the future as it has in the past. There is no legitimate journalistic or First Amendment value in broadcasting false accusations against Burke."

This will be the first interview Burke has ever granted, nearly 20 years after his sister's death. Dr. Phil was able to procure video footage of interrogations of Burke from when he was child, and they will be shown during the interview. Dr. Phil promised that he held nothing back, asking Burke about various conspiracy theories, and questioning him about details that have always eluded explanation, such as the pineapple chunks found in JonBenét's stomach during her autopsy. "He’s going to talk very specifically about how that pineapple came to be in his little sister's stomach the night that she was found dead," Dr. Phil told Today.

JonBenét's murder remains unsolved, and nobody was ever charged with the crime.