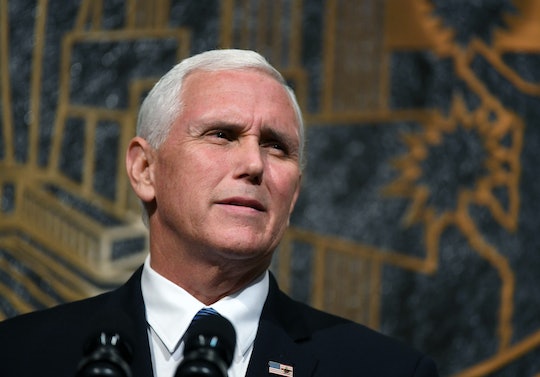 When Mike Pence left an Indianapolis Colts game on Sunday, after several players took a knee during the national anthem, many were quick to applaud the vice president. Supporters praised him for dedication to his country, our veterans, and our nation's flag. But how much did Mike Pence cost taxpayers with his Colts protest? Hundreds of thousands of dollars, apparently.

As CNN reports, the model of plane used for Air Force 2 is a C-32. And according to the Air Force, flying for one hour in a C-32 costs roughly $30,00. Pence's flight from Las Vegas to Indianapolis on Saturday took three hours and 20 minutes, which wracked up a bill of about $100,000. On Saturday, the vice president then embarked on a flight from Indianapolis to Los Angeles, which took four hours and 45 minutes. This added another $142,500 to the bill. Do the math, and you'll see that adds up to $242,500 for the flight cost alone, according to CNN.

But wait, that's not all. According to Business Insider, Pence's publicity stunt likely cost taxpayers well over $250,000. That's because CNN's $242,500 figure doesn't take into account the cost of advance personnel or Secret Service security measures at the football stadium before Pence's appearance. It also leaves out the costs of the vice president's Indianapolis hotel room and additional security measures there.

As CNN pointed out, some of the costs for Pence to fly into Los Angeles will be reimbursed by the Republican National Committee, since he attended a political event there. However, if our VP had simply flown from Las Vegas to Los Angeles, the 90-minute trip would have been roughly $45,000. That's a pretty significant difference in price for what many are calling a political stunt.

"I left today's Colts game because President Trump and I will not dignify any event that disrespects our soldiers, our flag, or our National Anthem," Pence said in a series of tweets, according to The Washington Post.

At a time when so many Americans are inspiring our nation with their courage, resolve, and resilience, now, more than ever, we should rally around our Flag and everything that unites us. While everyone is entitled to their own opinions, I don’t think it’s too much to ask NFL players to respect the Flag and our National Anthem. I stand with President Trump, I stand with our soldiers, and I will always stand for our Flag and our National Anthem.

In true Trump form, our president took credit for the publicity stunt, patting himself and the vice president on the back for wasting taxpayers' money.

Here's the thing, though. According to CNN, the group of journalists who came to the game with Pence was asked to remain in their vans. They were told that "there may be an early departure from the game," but weren't afforded more details. Clearly, the plan was never to stay in the first place.

Many criticized both Pence and Trump for this expensive, staged counter-protest. Hawaii Democratic Sen. Brian Schatz tweeted: "Wait. This was orchestrated to make a point? That's not an inexpensive thing to do."

Pence was attending the Colts-49ers game with his wife to witness the retirement of Peyton Manning's number, according to The Washington Post. However, both Pence and Trump were counting on the fact that 49ers would be kneeling during the national anthem — as they normally do. In fact, a slew of NFL players have done so over the past couple of seasons to raise awareness of racial inequality and social injustice in the U.S. And they didn't disappoint on Sunday. Colts players stood with arms linked and more than a dozen 49ers took a knee. Shortly after, Pence and his entourage made their dramatic exit.

I don't know about you, but I'm not at all impressed by this political stunt — especially since it was carried out on more than one-quarter of a million dollars of taxpayers' money. It's one thing to shamelessly attack the constitutional rights of peaceful protest, or to call for players who take a knee to be fired, or even to call a certain player a "son of b*tch." But throwing our money out the window to throw a tantrum about football players "disrespecting the flag" by raising awareness for inequality and injustice? This is another level of low, entirely.