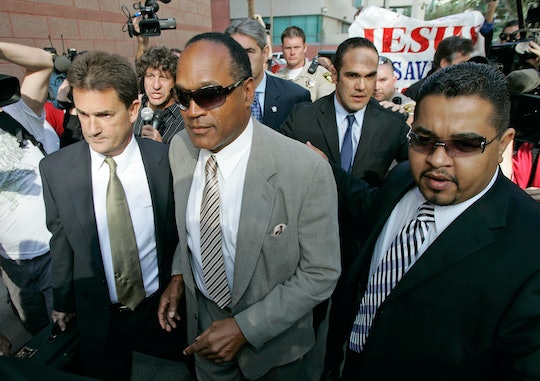 How Much Did O.J. Simpson Make From The Buffalo Bills? It Was A Record For The Time

Before he became better known for being put on trial for the murder of Nicole Brown Simpson and Ronald Goldman (which he was found not guilty of), O.J. Simpson was renowned for his sports career. Some people attribute the outcome of his trial to his fame, because the crimes he was accused of (and acquitted of) were so at odds with the persona he had cultivated as a celebrity that it was difficult for the public to believe he had committed them. Successful both in college football and professional football, Simpson first signed with the Buffalo Bills in 1969 and scored himself an impressive deal for someone just starting out. How much did O.J. Simpson make from the Buffalo Bills?

Simpson first made a name for himself playing for his college team, the USC Trojans, and he won the Heisman Trophy, which is awarded every year to the college football player who proves themselves best of the best. The trophy would eventually be sold at auction to pay some of the funds Simpson owed the Brown and Goldman families after the civil trial for the wrongful deaths of Nicole Brown Simpson and Ron Goldman found in their favor.

Simpson signed with the Buffalo Bills as a running back after college and while the exact dollar amount he made was not disclosed, it was very high for the time.

The owner of the Buffalo Bills, Ralph Wilson, said of Simpson's deal: "Simpson will be getting more money than any rookie has been paid since the merger [between the American and National leagues], and Buffalo will be getting what it feels is an outstanding football player who one day may take a place among the great running backs of his game." Simpson was apparently their first selection and top priority, and his contract earned him a bonus that made him rich.

A 1969 article in the Herald Tribune reported that the highest paid rookie since the merger – before Simpson – was Steve Spurrier in 1966, who signed a three year contract for $250k. Simpson's contract was for four years and while he was demanding $650k, he allegedly ended up compromising with the team for a figure in between $250k and $650k. Simpson's contract was presumed to be in the ballpark of $350k ultimately, which is quite a lot in 1960s money. That would be over two million dollars today.

Simpson would go on to play for the Buffalo Bills for eleven years before moving on to the San Francisco 49ers and then retiring from professional football in 1979.