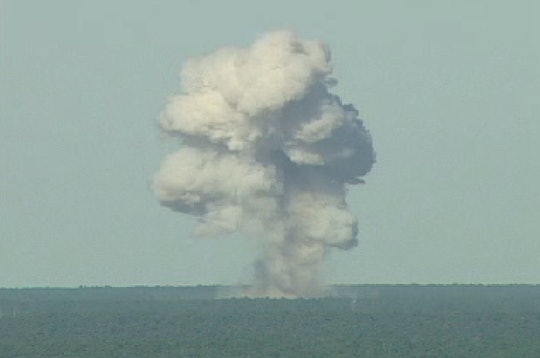 How Much Did The Afghanistan Bombing Cost?

On Thursday, CNN reported that the United States had used a GBU-43/B Massive Ordnance Air Blast bomb for the first time, dropping it on an ISIS cave and tunnel complex in Afghanistan. In addition to political or philosophical objections to the attack, citizens may be concerned about the price tag. How much did the Afghanistan bombing cost taxpayers? Social media has been buzzing with two competing numbers, but they're actually both wrong, and nobody seems to know the real price of a MOAB. The Air Force did not immediately respond to Romper's request for comment.

Twitter is rife with complaints that the bomb cost $314 million, and several news organizations were quick to point out that this figure was the price for 20 MOABs; the cost per unit was actually $16 million. Those numbers were sourced from Deagel.com, which was cited as a "military information site." But Deagel bills itself as a "non-profit, built on spare time" that is "not linked to any government in any way, shape or form." It offers no citations, links, or other proof for the information that it posts, and its IP address is registered to a private residence in Spain.

But where did this Deagel site get those numbers from? Did it just make them up? And what about the $314 million that everybody keeps mentioning, where did that originate? It looks like all the numbers can be traced back to one place, and we have Edward Snowden to thank for doing the legwork (and spreading false information). On Thursday afternoon, Snowden tweeted, "The bomb dropped today in the middle of nowhere, Afghanistan, cost $314,000,000," and helpfully linked to his source, a 2011 Los Angeles Times article about a completely different weapon. The article reported that the military had ordered 20 Massive Ordnance Penetrators from Boeing for $314 million. It even compared the two, noting that the MOP is "nearly five tons heavier than the 22,600-pound GBU-43 MOAB surface bomb, sometimes called the 'mother of all bombs.'"

Unfortunately, there's no easily accessible data on how much the MOAB cost, and in fact, there may never be. That's because the MOAB was manufactured in-house by the U.S. military, rather than contracted out like the MOP. The bomb was designed at the Air Force Research Laboratory Munitions Directorate at Eglin Air Force Base in Florida, which also built the casings. They were then sent to the McAlester Army Ammunition Plant to be packed with explosives. The military did partner with one contractor, Dynetics, to design the GPS system, but that only cost $35,000. As for the rest of the receipts, nobody knows.