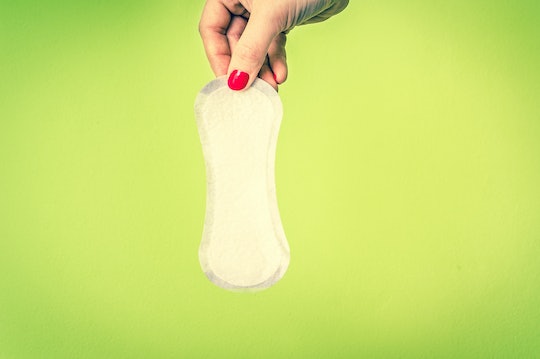 There are some questions that are hard to ask out loud and "How much discharge is normal?" is one of them. Yet, you'd be hard-pressed to find a fellow woman who hasn't wondered that very thing at some point in time. I know I certainly have. There's just a lot happening down there that wasn't covered in health class. Fortunately, there are some amazing gynecologists out there willing to assuage our fears, and quantify exactly what is normal in the discharge department.

Last year, Dr. Jen Gunter, an OB-GYN and pain medicine physician, tackled the subject of discharge on her eponymous blog, noting that in the last five years, she's seen more women concerned about what's considered normal. "Most textbooks and studies quote 1-4 ml per 24 hours as the normal range of vaginal discharge. What does that translate to in real life term? A pretty thick streak of discharge on a pantyliner is going to be about 1 ml. Most women who come in worried about their volume of discharge have about 2 ml on their pad," explained Dr. Gunter on her blog. Dr. Gunter also made an informative YouTube video that actually shows what 4 milliliters looks like on a pad.

When it comes to discharge, knowing what's "normal" is helpful, but what explains the fluctuations in discharge from day to day, or week to week? Because let's be honest, some days there just seems to be more stuff in your underwear at the end of the day. It turns out, there can be several different explanations, some totally benign, others worth scheduling an appointment with your OB-GYN over, according to Michelle Tham Metz, M.D., an ob-gyn at the Icahn School of Medicine at Mount Sinai, in an interview with Women's Health. Some benign reasons for an uptick in vaginal discharge include where you are in your monthly cycle, having recently given birth, and being on a hormone therapy, Metz said.

In fact, if you pay close attention to your discharge throughout your cycle, you may even be able to tell when you're ovulating — which can be helpful if you're trying to conceive — according to Very Well Family. "Fertile cervical mucus is a clue that ovulation is coming. Your vaginal discharge is fertile when it resembles raw egg whites. This is the best time to have sex if you want to get pregnant," explained Very Well Family.

Alternately, if you're on birth control, you might not see any real change to your discharge throughout your cycle, especially if you're taking estrogen. "Because estrogen in birth control suppresses ovulation, it’s unlikely you’ll see any major discharge changes during the month," explained Jessica Shepherd, M.D., a minimally-invasive gynecologic surgeon at Baylor University Medical Center at Dallas, in an interview with Self.

Unfortunately, there are also some not-so-benign reasons why you may be experiencing more discharge, and/or discharge with a different smell or color, including having a yeast infection, bacterial vaginosis, or sexually transmitted diseases like chlamydia, gonorrhea, or trichomoniasis, according to WebMD.

"Generally, thick, white vaginal discharge with a cottage-cheese-like texture or fishy smell is a sign that you want to visit your gyno just to be safe," advised Metz in an interview with Women's Health. So just keep an eye on the texture or smell of your discharge, and know that the volume can fluctuate.

More Like This
Can You Breastfeed After A Breast Lift? Experts Explain
6 Sex Positions To Reduce Leg Pain
The Difference Between The PICU & The NICU
Here's How To Keep Your C-Section Incision Dry