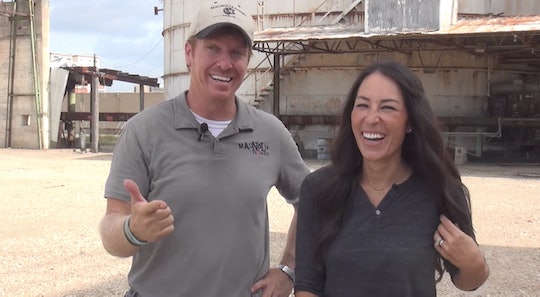 Watching HGTv's Fixer Upper can be pretty addicting, thanks to the chemistry between the hosts, married couple Chip and Joanna Gaines. They're always goofing around with each other and seem like great business partners. There might be a reason they're always so happy — Chip and Joanna Gaines' per episode salary is a pretty big chunk of change. Well-deserved, of course.

According to Starcasm, which estimates pretty accurately celebrity net worths and salaries, the Gaines' make $30,000 for every single episode of their show and they also get an undisclosed fee from the families' that participate. With 16 episodes per season, that's almost half a million dollars. Some seasons, like the third one, ran long with eighteen episodes in all, so their yearly income likely varies. If you want to have the Gaines' speak at a conference or something, they also charge $30,000 for that.

Their fees are a little higher than some other HGTV talent. Flip or Flop's Christina and Tarek El Moussa were getting about $10,000 each per episode. So the Gaines' are just a little more of a draw.

In addition to their show fee, the Gaines also have Magnolia Market, which is valued at $3.5 million and the overall worth of their various Waco, Texas properties is $7.6 million.

Fixer Upper is already on Season 4, but there were rumors that Joanna was already over it. She set the record straight on her blog earlier this year. "Don't believe everything you read," she warned fans. Though she did admit to being super busy — just not so busy that she's willing to give up the show just yet, even if she is currently developing a beauty line. Gaines wrote:

So many things are happening right now and it feels like we are moving at the speed of light. At times, it’s even hard to keep our own parents in the loop. At this point in our career we can honestly say, we’ve heard it all — from reports of us moving our family to Vegas to us having more or less children than we actually have. At the end of the day, we’ve learned it’s impossible to control all the information that’s out there.

She also had kind words to say about her other half. "Don’t get me wrong, working with your spouse comes with its own set of challenges, but it’s very true that Chip and I balance each other out," she said of her professional relationship with her husband. In all, it sounds like the Gaineses are having a great time with their fame on TV. Hopefully, they'll keep the episodes coming.

More Like This
Exclusive: 'Firebuds' Dives Into Hanukkah Traditions In Festive New Episode
Meghan Markle Spent Her Thanksgiving Volunteering For A Cause Close To Her Heart
14 Baby Names Inspired By 'The White Lotus' That Deserve A Round Of Aperol Spritzes
Kim Kardashian Says She's "Shaken" By Balenciaga's Ad Campaign Featuring Children