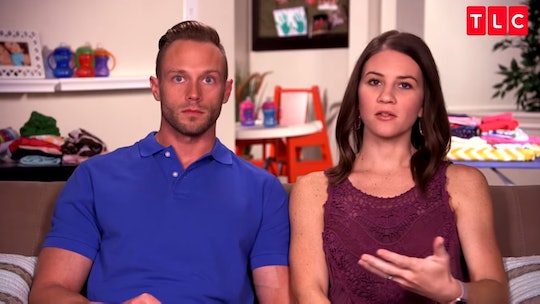 How Much The Busbys Make Per 'OutDaughtered' Episode

Money is a frequently-discussed topic when multiple births occur. Having more than one child is common, but generally, parents have the ability to spread those expenses out. But paying for two, three, or even five cribs at once can get hairy, leaving fans of the TLC series OutDaughtered wondering how much Danielle and Adam Busby make per episode. Is the reality show taking care of them? Is it really worth it to have a production crew trailing your every move? To have a living room full of cables and bright lights while your five toddlers are learning how to walk?

While nobody is offering up any exact figures, it's pretty safe to assume that the family is happy with their arrangement. After all, they've been doing this for three seasons. Back in 2009, reality producer Terence Michael told E! News that families on reality-shows are typically paid about 10 percent of the show's budget, and he estimates TLC shows are budgeted around $250,000 to $400,000 per episode, meaning a family gets $25,000 to $40,000 for a week's worth of filming. The series has aired 18 episodes so far, with more to come, which means the family could rake in over a million bucks before the current season is over, if Michael's estimates are correct.

Veteran TV executive John Ford, who's worked at TLC and other channels, told Slate in 2013, "You can still make a good hour of unscripted for $300,000 to $500,000," which jibes with Michael's estimate. Factoring in four more years of inflation, the budget for OutDaughtered is likely somewhere around $400,000 or more. However, not everyone agrees with that 10-percent figure. An unnamed agent told Business Insider that "For those docu-ensembles, especially if they're nobodies, per episode it ranges from low-end, like $1,500 an episode, to $3,000 at the high end." That being said, the cast of History's Pawn Stars have been known to make up to $25,000 each per episode. A typical "docu-ensemble" might feature ten or fifteen different adults, but all eight stars of OutDaughtered are living off of the same income, so that's got to work in their favor.

Finally, don't forget that #MoneyTroubles are probably being played up a bit for the camera; If you paid attention, you may have noticed that while a December 2016 episode focused on how overwhelmed the Busbys were at the prospect of spending $2 million on college one day, the same episode also featured Adam purchasing a drone and a $4,500 playhouse for the girls, and the family is also comfortable enough to spend nearly $1,000 a week to send the quintuplets to an "Early Childhood Prep School." And TLC money aside, In Touch estimates that Adam earns about $87,500 working as an account manager for a communications firm, and the couple just bought a spinning studio franchise with their friends.

In other words, it's safe to say that none of the Busbys are going hungry. And really, in the end, that's all that matters.

More Like This
Keke Palmer Casually Drops Her Baby's Sex On Jimmy Fallon
Josh Duhamel Is Glad He Took Fergie's Advice About Dating After Divorce
Freeze! The Single From The New 'Bluey' Album Just Dropped
Marie Kondo Gives Up Tidying Post-Kids, Sparking Joy For Moms Everywhere
What Parents Are Talking About — Delivered Straight To Your Inbox