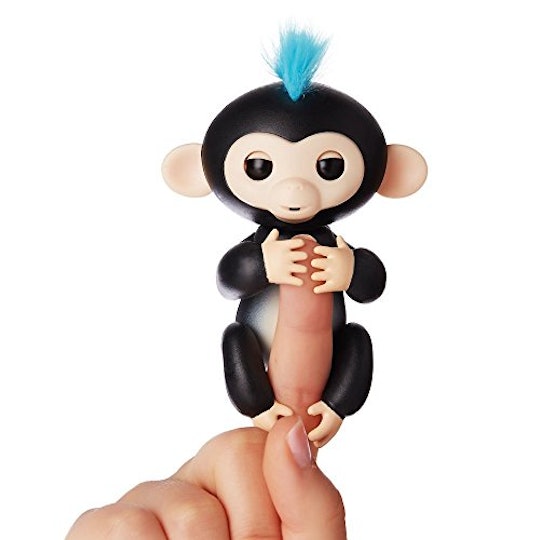 I remember when the hot Christmas toy was the giggling Elmo. There were so many stories about parents shelling out hundreds of dollars to ensure their kid could hear that incessant giggling in time for the holiday. This year, the hot and very-hard-to-find toy is a Fingerling, a little interactive figure that sits on your kid's finger and blinks, giggle, and wiggles. If your kid is asking for one for Christmas, you might be wondering, how much do Fingerlings cost? Resellers are gouging parents before Christmas, so you'll want to keep that in mind as you're searching for your kid's must-have present.

When Fingerlings, made by company WowWee, came out a few months ago, their retail price at stores like Walmart was around the $15 mark, but with the holidays headed our way soon, the toys are becoming more difficult to find. In fact, they're sold out on Walmart.com and Target.com at the moment. As the toys have become more scarce, the price has been creeping up and up, even reaching into the triple digits to secure delivery by Christmas. The average price on Amazon for most Fingerlings is now between $25 to 45 from third party sellers, typically with additional costs for shipping, causing some parents to worry about price gouging before the holidays.

So what's all the hype about a little toy? Today reports that according to retail expert James Dion, president and founder of retail consulting firm Dionco Inc., "the Fingerlings' price point — just a little over $10 — combined with the toys' impressive technological capabilities makes it a unique item." The toys perch on a child's finger and are able to react to sound, motion and touch, and can even blow kisses when they see you do the same!

When the toy debuted a few months ago, toy experts began predicting that it would be the hot gift for kids this Christmas, and the toys began flying off the shelves. By November, the toys were already becoming harder to find, and prices were rising. Now, you'll have a tough time finding a Fingerling at its original retail price of about $15.

According to TIME Magazine, Fingerlings were created by a woman, Sydney Wiseman, who had an interest in pygmy marmoset monkeys when she was little. "While she could never have one of the finger-sized animals as a pet, there was another way to own one: as a toy," the magazine reported. By October, the Canadian company had already sold more than a million Fingerlings, and that number is likely to be eclipsed as we pass the holidays.

Robotic toys are certainly the rage for kids this Christmas, although most don't come with such a low price tag as the Fingerling started out. The FurReal Roarin' Tiger, another hot toy for the holidays, is more of an investment at $97, but is more readily available from most retailers. A more modest robotic toy option is the Zoomer Kitty, Whiskers the Orange Tabby, which pounces, purrs, and walks around. It only costs $43 and is still in stock at places like Toys "R" Us.

Fingerlings aren't the first popular toy to make the holiday shopping a little more difficult for parents. Last year, Hatchimals were the hot toy to scoop up and TIME reported, "By mid-November, Hatchimals were sold out at all major retailers, and a full-on toy craze had taken over, with desperate parents paying $125, $150, or even over $200 for the hatching interactive toy that retails for $50 to $60."

There's still a little time before Christmas for the price of Fingerlings to continue to rise, so if they're on your kid's Christmas list, it's best to act fast!