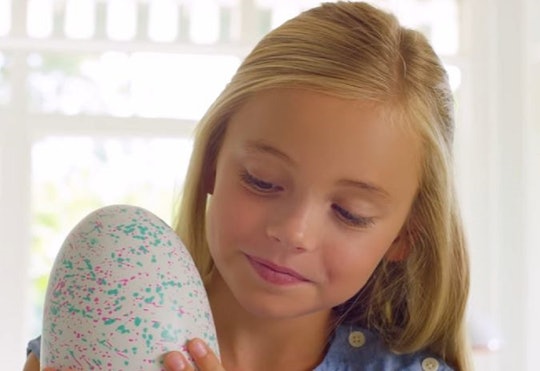 How Much Do Hatchimals Cost? Resellers Are Gouging Desperate Parents Ahead Of The Holidays

Good news, parents! The holidays is coming up, and with them the annual "it" toy every kids wants, especially yours, that you won't be able to find, and even if you did, you wouldn't be able to afford it. This year, it seems, is the year of the Hatchimal. They're sold out everywhere and resellers are positioned to make a tidy profit off of parental desperation. So how much do Hatchimals cost? They retail for $60 but it's going to cost you a lot more to score one from a reseller.

What is a Hatchimal, you might ask? Here's the deal. It's an egg with a stuffed animal inside with color flashing light eyes that makes cooing and squeaking noises. The kid sees the flashing lights through the egg and after about a total of an half of an hour playing with it, the toy "hatches" out of the egg. The commercial makes it look like a fantastical adventure, but my own kid's experience with a Hatchimal was unique. She got one in October for her 6th birthday. We paid $60, which seemed like a lot at the time, but now seems like a bargain. She opened it, roughed it up until it "hatched" a while later and then got bored with it (like most kids do).

But I have no intention of shading Hatchimals. My kid was thrilled when she opened it. My point is that if you're one of the parents this holiday season who can't get their hands on the coveted Hatchimals, don't spend too much time beating yourself up. It's OK, and it will restock eventually, so maybe think about getting it for their next birthday.

Hatchimals is aware that parents are going bananas trying to chase down one of the toys, so the company released this statement on its website:

Stores all over the country have seen Hatchimals flying off the shelves, according to US Magazine. "As soon as people knew it was here, the moment we started putting it on the shelf, people started taking it off the shelf," David Raposa, a manager of a Robinson, Pennsylvania, Walmart told his local news station, according to Us.

Even Nicole "Snooki" Polizzi from MTV's Jersey Shore is looking for a Hatchimal hookup.

Smart entrepreneurs who were able to predict the demand for Hatchimals and stocked up on product are reselling the toys for crazy marked up prices, ranging anywhere from $150 to more than $300, according to GottaBeMobile. You can find various folks selling them on eBay and Craigslist.

That's a lot of cash for 30 minutes of hatching and a stuffed animal, if you ask me.

Good luck this holiday season, parents. And remember, if your kids don't get the Hatchimal this year, it's going to be fine. They'll restock eventually.