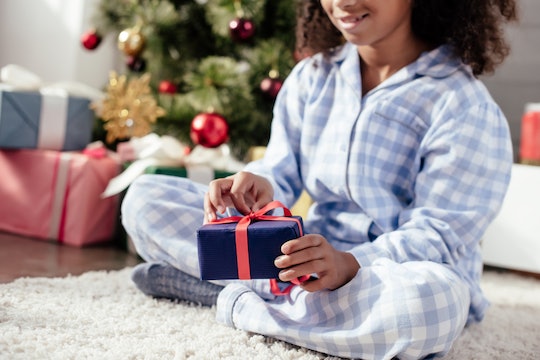 The Amount Parents Spend On Holiday Presents May Startle You

'Tis the season... to spend yourself out of house and home to make the holiday season magical? Hopefully not, but the answer to the question of how much parents spend on holiday presents might startle you. People apparently spend beaucoup bucks in order to have a jolly holiday, way more than I had previously thought.

The National Retail Federation forecasted that shoppers will spend 4.1 percent more this year than they did last year, spending a whopping $1,000 on gifting. But though spending is expected to be up for everyone, parents seemed to be the most affected by the urge to play Santa.

In fact, according to the T. Rowe Price 2018 Parents, Kids & Money Survey, nearly half (45 percent) of moms and dads surveyed said that they make an effort to get their kids everything on their lists, regardless of the cost of the items.

What's more, the survey, which polled 1,013 U.S. parents of 8- to 14-year-olds, found that those who do their best to deliver every toy on their kid's list are also more likely to put their gift spending on credit cards. That might not be that much of a surprise, but it can put a ton of pressure on parents.

Meanwhile, this category of parents is also less likely to have retirement savings than parents who didn't feel the need to say yes to every dress or Lego set desired.

And while it's easy to judge parents from the outside — social media mom-shaming of giving kids too many gifts is unfortunately a *thing,* as Mic reported — financial experts stress that no one's immune from emotional spending, especially during the holidays.

“We all want our kids to have amazing and memorable holidays, but there’s evidence that being overly generous has consequences,” Stuart Ritter, a financial planner at T. Rowe Price and himself a dad of three, noted in a report of the T. Rowe Price findings.

“Kids may be picking up the wrong lessons from their parents when they don’t have to prioritize the items on their holiday wish lists and make trade-offs."

According to U.S. News and World Report, parents can stem the tide of mistletoe materialism by setting the boundaries of gift-giving and household spending in advance, as well as expanding the idea of holidays gifts to include experiences, such as a play or painting class instead of always just offering toys.

This is good stuff, as long as parents remember the real point of the season is joy, peace, and making memories as a family... things that don't actually cost a thing.