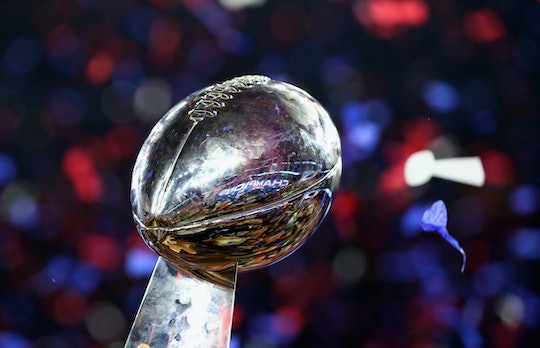 Here's How Pricey Those Super Bowl Tickets Actually Get

Admittedly, I am not a football fan. It's a fun game to watch, but the outside issues of brain damage, insanely high salaries, and rape allegations leave me with a bad taste in my mouth. So needless to say, the Super Bowl is not the bona fide holiday for me that it is for many Americans. But given its wild popularity, I'm still left with a heaping curiosity about the cultural craze that is the Super Bowl. Exactly how much money are people shelling out for this experience? How much do tickets to the Super Bowl cost?

At the time of my writing this, one quick search of the internet will tell you that the cheapest 2018 Super Bowl tickets for sale range in cost from $3,650 to $5,200, depending on the seller. Believe it or not, these figures don't factor in the many fees slapped on top of the ticket that may add up to an extra several hundred dollars when it's all said and done. And these are just the base figures. As you might expect, the price point skyrockets if you're contending for the best seats in the house or are looking for a package that includes a pre-party or hotel. It's not unheard of for people to throw down ten grand on this annual football game.

According to Time, Super Bowl ticket prices fluctuate from year to year; in fact, they can even soar up or down within the course of a few days. Because of this, there is no standard Super Bowl ticket price, although there is a general window of between $3,500 and $5,500 that you can more or less count on. The price points are determined based on the current supply and demand of the given moment, as well as how much money fans are willing to shell out that year as predicted by large national ticket brokers. During years that host teams with a notoriously rabid fan base, tickets can easily start out at $1,000 higher than they were the year before.

With prices drastically increasing and decreasing from day to day, when is the best time to buy Super Bowl tickets? Does the early bird catch the worm in this case, or are the best prices saved for last? There may be no way to know for sure, since the market changes by fan demand and the supply of tickets that is controlled by the powers-that-be. But most years prove that resale prices decline in the few days leading up to the big game. So if you're willing to shell out a few thousand dollars but can't afford to double that, keep in mind prices may hit bottom if you wait to the last minute as sellers get antsy and desperate. Unfortunately though, there is no guarantee and if you take the gamble, you might find yourself walking away empty-handed.

If those prices seem completely unattainable to you, you aren't alone. And before you decide to spend the next 365 days saving for a golden ticket to next year's game, take a minute to consider what else you could do with that money. One local news channel did an entertaining roundup of what you could buy for the price of one Super Bowl 52 ticket, and their list is pretty epic. My personal favorites were a seven-day family vacation package at Disney World, or four roundtrip flights to Seoul to catch the Olympics.

Turns out, there's a reason most Americans are content to watch the showdown from the comfort of their best friend's living room couch. Cheese dip, anyone?