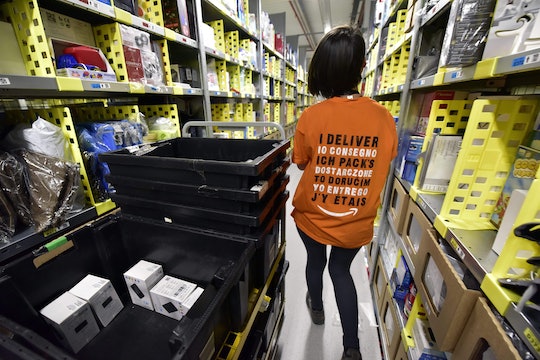 How Much Does Amazon Go Cost? It Will Make Grocery Shopping Much Faster

Amazon has pretty much revolutionized online shopping, and now, it's preparing to revolutionize the way we buy groceries, too. But unlike its usual virtual domain, its latest offering, Amazon Go, is actually a physical store. In fact, the store itself sounds an awful lot like a regular grocery store: you go in, pick out your food, and pay. The big difference? There are no lineups, and zero cash registers. Scan the app when you go in, and everything you buy is automatically added to your account. How much is Amazon Go? Despite its slick, high-tech nature, the lack of a full staff means that it's actually very budget-friendly. But don't get too excited — there's only one store in existence at the moment, and it won't be open to the public until next year.

According to CNN, the first Amazon Go store has been opened in Seattle, which is home to the company's headquarters. Right now — presumably while Amazon continues to ensure it has worked out all the kinks — it's only open to Amazon employees. But according to the company's Amazon GO FAQ, the idea for the modern, tech-heavy grocery store came about four years ago, when Amazon execs wondered whether it would be possible to "create a shopping experience with no lines and no checkout." The goal was ultimately to develop a physical store where shoppers could literally just take whatever they needed and leave, without having to bother with checkout lines and handing over actual money.

Amazon explained that Amazon GO works in a similar way to a self-driving car, using "computer vision, sensor fusion, and deep learning." The shelves are designed in a way where, when an item is removed, it is automatically added to that customer's online cart. And if you put it back? It's automatically removed from your cart as well. When customers are finished shopping, they literally just walk out the door, as the cost of their items will be charged to their Amazon account automatically. Impressive.

At the same time, given all of the frustration I already experience on a regular basis at my usual grocery store, from things like food items ringing up at the wrong price, or from those dreaded self-checkout machines that are seemingly unable to read anything correctly, I can't help but imagine that Amazon Go could be one big nightmare of items incorrectly added to my account without me realizing it. And what happens if there's a tech glitch? Amazon hasn't yet addressed that concern, but conceivably the idea is that the technology in play at Amazon Go is more cutting-edge than what's used at your local supermarket, and, naturally, it's also something that's been developed slowly over a number of years to ensure it's not a total disaster. And since they've now officially announced Amazon Go publicly with an intention of making these stores available, it's likely that so far, the test site is doing pretty well.

In all honestly, the store itself sounds pretty great: according to Amazon, Amazon Go sells ready-to-eat meals "made fresh every day" by on-site chefs, along with aisles of grocery staples "like bread and milk to artisan cheeses and locally made chocolates." Heading home for the day and not sure what to cook for dinner? Amazon Go has a solution for that, too. Their "chef-designed Amazon Meal Kits" include "all the ingredients you need to make a meal for two in about 30 minutes."

But while Amazon Go could end up being a popular choice for shoppers in a hurry, it won't exactly do any favors for unemployed Americans looking for jobs. Amazon Go is a fun concept, and certainly could be very useful, but, at its core, it's essentially offering up a way to eliminate the need for actual human workers by using technology. Some people will surely still need to work at Amazon Go, but the store won't need nearly as many employees as the average grocery store. And, as Forbes noted, if Amazon Go takes off, it makes sense that other, more traditional grocery stores may follow suit, swapping out employees for technology as well.

According to the Bureau of Labor Statistics, an estimated 3.4 million Americans work as cashiers. And given that one of the causes championed by President-elect Donald Trump during his campaign was creating jobs and saving lost jobs (something he recently drew much attention to as a result of negotiating a deal with Carrier to keep 1,000 jobs from being sent to Mexico, according to The Washington Post), it will be interesting to see what the reaction to Amazon Go will be as it moves ahead. After all, a hipster-y store in downtown Seattle likely to attract hungry young professionals is one thing. But layoffs at suburban or small town grocery stores as Amazon Go-esque technology expands? That could be much bigger deal (albeit, one that isn't likely to take place any time soon — if at all).

I have to admit though, the idea of a fully-automated grocery store is kind of cool. And if one day I can get there in a self-driving car? Well that'd be even better.