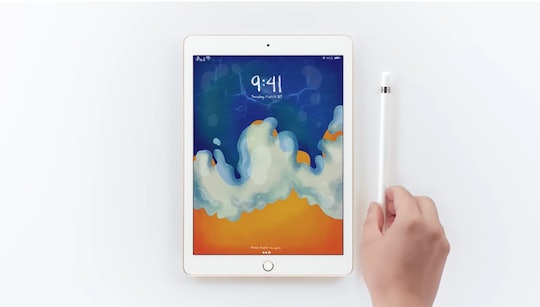 Apple's New iPad Is Here & It's More Affordable Than You Think

At Apple's education event in Chicago on Tuesday, the company unveiled a new iPad geared towards schools and its students. Although it's not uncommon for Apple to release a new product to great fanfare, this announcement is particularly exciting due to the new iPad's affordability. So, how much does Apple's new iPad cost? Spoiler alert: it looks like students and teachers are in luck this time around.

Throughout the past few years, Apple's CEO, Tim Cook, has put a lot of effort into supporting education initiatives. From teaming up with Malala Yousafzai's Malala Fund in January to offering its Everyone Can Code curriculum to schools and colleges for free, Cook wants Apple to play an integral part in making education more accessible. And Apple recognizes that if you want to do that, you first have to make learning more affordable.

So, in an effort to keep costs as low as possible for schools, Apple is offering its new 9.7-inch iPad for $299, CNBC reported on Tuesday. Making matters even more ideal is that the updated iPad features a ton of new apps for educators and students, including "Schoolwork" and "Everyone Can Create," according to Apple's press release. Additionally, the iPad supports Apple Pencil, a feature that allows students to be more creative with their schoolwork.

Cook elaborated on the new iPad's student friendly features at its education event in Chicago on Tuesday, stating, according to MacWorld UK:

At Apple we care deeply about education because we love kids and we love teachers. We had a unique insight into how technology could inspire kids to unleash their creative genius. And we believed that technology could help teachers deliver a unique and personalized learning experience to all kids. We've never stopped believe this, and we've never stopped working on it. We know our products can help bring out the creative genius in every kid.

As for the new apps that Cook hopes will inspire each kid's "creative genius," the Everyone Can Create app offers "a new range of free curriculum that help teachers easily weave drawing, music, filmmaking or photography into any lesson, topic or assignment," according to Apple's press release. Translation: the app is designed to help teachers make lessons more creative.

The Schoolwork app, however, is more about student productivity. The app allows teachers to manage student data and to create various assignments, according to The Verge.

Lastly, the Apple pencil gives kids the opportunity to get creative as possible with their school work. The feature will pair nicely with the iPad's A10 Fusion chip for 40 percent faster CPU and 50 percent faster graphics performance. The only downside is that you have to buy the Apple pencil separately — schools get it for $89 while consumers can purchase it for $99, according to CNET. You can check out the Apple pencil in action below:

And if you're a teacher who is incredibly excited about this new device, the good news is you can start ordering the new iPad today. Yep, as of Tuesday, the iPad is currently available to order and it will start arriving in stores this week, according to Rolling Stone.

But education stuff aside, how much will iPad cost for your average consumer? The iPad's price tag for regular customers is $329, according to Apple Newsroom. Of course, $30 might not seem like a huge price difference at first glance. Still, the discount being offered to schools is at least a step in the right direction towards making education with technology more accessible.