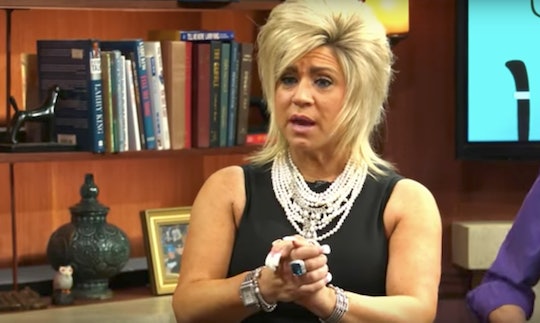 Caputo writes on her contact page on her website that she was booked for two years before the show even aired on TLC and she already had an extensive waiting list. Since being on national television, you can imagine that that list has only continued to grow. Caputo writes:

The people that have emailed, written in or filled out the online form have been added to that list. Unfortunately being on this list does not guarantee an appointment. The people featured on Long Island Medium are selected from all of the lists. Factors include location, availability, and who feels comfortable being on television are taken into consideration.

Caputo adds that it's obviously hard to schedule that far out, so there's a lot of shuffling to be done. So, if you want an appointment, the first thing is to get on that waiting list and wait patiently. In the meantime, you might want to get a little savings fund going.

There's no set, official rate on her webpage, which has led to rumors in the past about how expensive her services are. For some reason, people used to claim that Caputo charged $400 for 30 minutes, which she denies.

In an interview with blogger Saralee Rosenberg, Caputo said that number is totally off. She added, "and thank you for letting me put that rumor to rest. Even before the show, the wait list was a little over two years (as it is now). And my fee for an hour is still very reasonable. Much less than the rumored amount."

On her website, Caputo later clarified her payment program. "People often ask how much I charge for readings. It ranges from $50 to $175 depending on if it’s a private or group reading," she wrote, though she doesn't stipulate whether that's per half of an hour or per hour.

She added that 100 percent of the money is donated to charity and that her clients all make a donation directly to a charity she supports for each season of the show. Meals on Wheels and local Long Island veterans charities have been some of the recipients, so whatever the cost turns out to be, it's going to a good cause and not Caputo's personal checking account.

It's been a long ride for Caputo. Before accepting that she was a medium, she had anxiety about communicating with the dead, and would have panic attacks all the time, according to People. Now, she has a little trick for coping. "I jokingly say it’s like when you have kids and you want to ignore your kids," she explained. "That’s what I do. I won’t tell someone if I sense and feel things [in a random moment].” Sounds pretty reasonable, right?

If I’m in a store and my heart starts racing, I know it’s not me. I’ll just say to myself, ‘Be gone you and out of me,’ and that means that I’m letting the spirit know that I know it’s present, but that I’m not channeling with it right now. Because I might be in the toilet paper aisle and it could be someone in the next aisle over! I don’t know. I’m not going to go seek someone out.

Medium or not, a woman's gotta finish her errands, right? And knowing that her schedule is so packed, it makes sense that she has to prioritize her time.