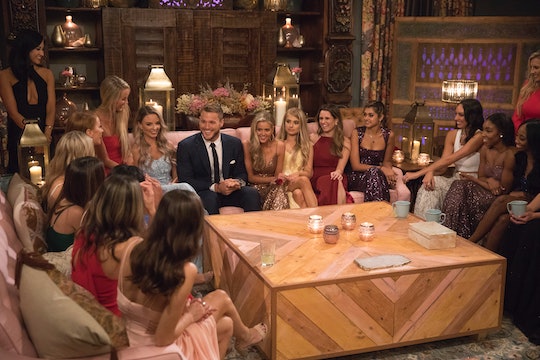 This Is How Much The Pirate Group Date Costs 'The Bachelor'

One of the best things about The Bachelor is the dreaded, uncomfortable, fabulous, group date. It happens to nearly every contestant. On a group date on Monday, Colton's ladies (for whatever reason) dressed up as pirates and competed for the honor of saving Captain Colton from... danger. However odd it seemed it also seemed like a lot of fun. So fans who want a similar experience might be asking themselves how much a pirate adventure like this would cost. Let me break it down, because you deserve to know.

This swashbuckling group date was filmed at Pirate's Dinner Adventure in Buena Park in California. While I can't promise that you'll be allowed to make out with Colton afterwards, you can participate in an interactive pirate show while being served delicious pirate-themed grub. So if you're the type of person who has seen The Pirates of the Caribbean about 30 times (guilty), then this could be just the outing for you and your whole family. Think Medieval Times but instead of jousts, turkey legs, and knights, you get eyeliner'd and bewigged pirates aboard an 18th century Spanish galleon (I believe this would be the ship). I now feel kind of bad for making fun of this group date because that sounds awesome.

Ok so now to the really important question — how much is all of this going to set you back? Well, that depends on what kind of experience you (and your kids) really want to have. For general admission, that is, for everyone ages 12 and up, the cost of a ticket is $61.95. Kids under 12 cost $36.95 and babies are free (it's not like they eat much). But that's just for a standard ticket. You can also get upgraded seats (not unlike on an airplane) for $10 to $15 more — and this will guarantee you a perfect spot to check out the action. And for $19 additionally, you'll get VIP seating. None of this, of course, is counting the cost of airfare if you happen not to live in California. Sorry, guys.

What you will probably not get, no matter how many times you upgrade your ticket, is a date with Colton, who at this point in the show seems to be having some trouble deciding between the 20-odd women still trying to be his future wife. There appear to be two major sources of tension in the mansion at the moment. One is between Demi and anyone over the age of 27, particularly Tracy. The other is between former Miss America contestants Hannah B. and Caelynn, who were roommates back when they competed for the crown. It's hard to say what exactly went down between them, but it didn't end well. Now each has called the other "manipulative" and "deceitful" to Colton. Don't they know that this is the kiss of death on this show?

Colton hasn't yet decided between them, but I have a feeling that things are going to come to a head pretty soon — pirate sword or no.

Editor's note: an earlier version of this article misidentified the location of Pirate's Adventure. The headline has been updated as well.