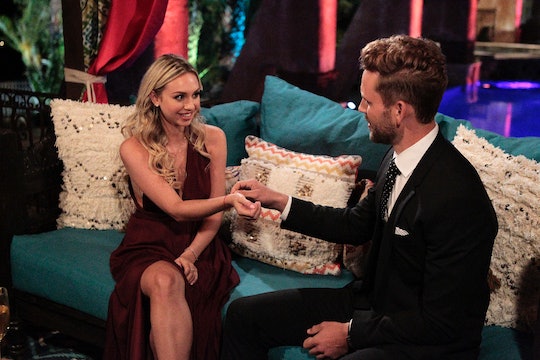 One of the first things that got Bachelor Nation talking about Season 21’s Bachelor “bad girl” Corinne Olympios was the fact that the 24-year-old still has a nanny. Corinne’s introduction in the season premiere featured Raquel, a woman who (as Corinne tells it) does just about everything for her. In the first few minutes of Corinne's screentime, we saw the older woman bring her a bowl of cut cucumbers, right before Corinne insisted that if she were to ever move out of her family's home she'd take Raquel with her. But exactly how much does Raquel get paid to handle these everyday tasks for Corinne?

According to what she told the other contestants on the Jan. 16 episode, Raquel takes care of everything from making Corinne’s bed to preparing her vegetable slices and cheese pasta. To fellow contestant Jasmine’s horror, Corinne confirmed that she doesn't even do her own laundry – that's all Raquel too.

Essentially, it seems as though Raquel functions as a sort of hybrid personal assistant/housekeeper/cook, though Corinne bristled at the idea of calling her longtime companion a “housekeeper” in a now-deleted tweet. Based on the way Corinne talks about her, Raquel seems to have been employed by the Olympios family for a very long time – and doesn't appear to be vacating her position anytime soon, much to Corinne's probable relief.

Though details about Raquel’s specific salary are unavailable, we do know average amounts paid for nanny services in that area. According to SitterCity, nannies above the age of 21 are paid $12.42 per hour in Miami, Florida. However, we don't know whether Raquel is a full-time nanny and whether she lives-in or lives-out, all of which can vary the rate of pay.

American Nanny Jobs puts the rate of pay at $400-$800 per week for a live-in nanny with two or more years of nanny experience or between $10 and $18 per hour for a live-out nanny. Various Miami nanny salaries listed on Indeed hover around the $22,000-$28,000 mark, which tracks with the figures put out by American Nanny Jobs, breaking down to about $423-$538 per week.

Whatever Raquel's actual salary is, one thing's for sure – Corinne comes from a privileged background, given that her family business generates enough income to keep a nanny employed to the tune of thousands of dollars each year. The most recent episode of The Bachelor ended with several of the women confronting Nick about their Corinne-related grievances (and Raven actually telling him about Corinne's nanny). We'll need to tune in this week to see whether that revelation is a deal-breaker for him or not.