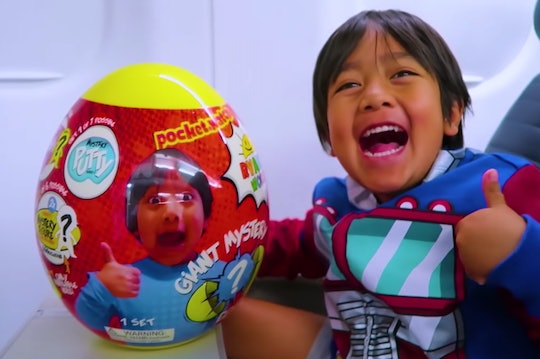 Here's How Much Ryan ToysReview Probably Makes Per Episode

If you haven't heard of Ryan ToysReview, you should definitely look up the YouTube sensation, especially if you have kids. Ryan of Ryan ToysReview is a 6-year-old boy who stars in a whole YouTube series in which he plays with toys and — you guessed it! — reviews them. Talk about living your best life, right? Plus, once you break down how much Ryan ToysReview makes, even per episode, you'll really be wishing you were living that toy review life, too.

The world’s 10 highest-paid YouTube stars earned $127 million between June 2016 and June 2017, according to Forbes. And Ryan was tied for 8th highest paid YouTuber of 2017, Parents reported. In total, Ryan of Ryan ToysReview made about $11 million in pretax income in 2017, Business Insider reported. That's a serious chunk of change for a kid who's just old enough to be in elementary school.

But that's for a year of work. Ryan’s mom actually left her job as a high school chemistry teacher to work on the YouTube channel as a full time job, The Verge reported in late 2016. Ryan's parents shoot and produce the account's videos themselves, and have ever since Ryan ToysReview started in March 2015, Business Insider reported. The outlet notes that Ryan ToysReview videos go up almost every day, which sounds like a lot of work for the whole family.

Let's break it down. Assuming that Ryan ToysReview makes about $11 million every year, and assuming one video goes up every day in a 365 day year, that means Ryan ToysReview makes approximately $30,136.98 every "episode." There are a vast majority of people in the world who don't make that much in an entire year, let alone for one YouTube video.

So, how did Ryan ToysReview become so popular? About four months into posting videos he finally went viral, with one video gaining a ton of attention, according to The Verge profile. After that, views started to double every month, and the rest is history. The infamous viral toy review video, featuring Ryan opening "a giant Disney Pixar Lightning McQueen Easter egg surprise filled with cars and planes toys for kids," is below.

It's not exactly hard to see why the Ryan ToysReview channel has over 15 million subscribers as of Tuesday afternoon. The content is completely wholesome, and clearly something that parents can watch with their kids, or let them watch on their own. Plus, Ryan and his parents are super adorable, and Ryan genuinely seems to have a great time with every single toy he reviews.

Ryan was just 3-years-old when he began doing these reviews, and now they may have him and his family financially set for life. And to think, it all started because he saw other kids doing toy reviews and wanted to give it a shot himself.

Ryan's mom told Tubefilter in a 2016 interview that Ryan once said to her, "How come I’m not on YouTube when all the other kids are?" So his parents decided to let him try it. Ryan's dad added:

Another reason we started is because Ryan has a lot of extended family outside of the U.S., so YouTube was a great way to share childhood memories with them. It’s also a great way for us to spend more time together as a family and to bond with him.

Which are possibly the loveliest reasons ever for an extremely popular YouTube channel to exist.

And it doesn't sound like Ryan and his parents are going to slow down (or stop making all that money) anytime soon. Ryan's mom told TubeFilter that as long as Ryan still likes doing the reviews, and it doesn’t disrupt his routine, they'll keep making them. "But the moment he’s not having fun any more," she said, "that’s when it will be time to stop."

And if having a YouTube channel and a "job" reviewing toys makes Ryan happy, regardless of how much money he and his family make per episode, all power to him. He brings a whole lot of joy to other kids and families all around the world, and that's a truly priceless payoff.