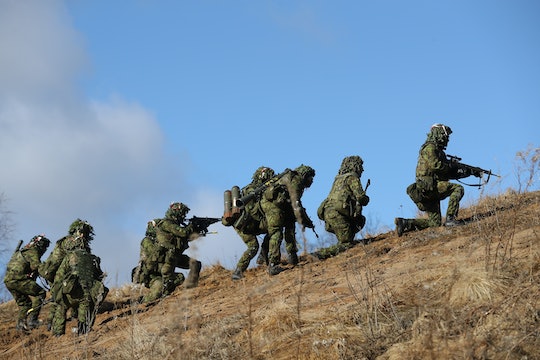 Here's How Much War Costs Taxpayers

Volatile international relations between the United States and other nations have brought the possibility of war to the forefront of public discussion. Not only is the threat of violence an unsettling shift, but the potential cost of war also weighs heavily on Americans' minds. So how much has war cost American taxpayers up to this point? Taking a look at the United States' allocation of funds over the past 15 years reveals that war costs are actually nothing new for Americans; Since Sept. 11 2001, trillions of dollars have been spent.

The National Priorities Project (NPP) has a running counter that calculates the total cost of war since 2001. You can watch live while the numbers rise. The results are staggering: Every hour, taxpayers in United States are paying $8.36 million for war, the NPP reports. Seeing as the counter, "include[s] all of the funding that has been appropriated by Congress through fiscal year 2015," President Donald Trump's war spending in particular has not been taken into account. Still, a grand sum of "$1.64 trillion has been allocated through the Overseas Contingency Operations (war) fund" through 2015 — amounts that "include both military and non-military OCO spending, such as reconstruction and funds for the Department of State."

Updated statistics in a report by researchers Brown University's Watson Institute of International & Public Affairs' include some 2017 projections regarding the cost of war. Academics found that, through 2017, "the total US budgetary cost of the wars [will reach] $4.79 trillion." These amounts extend beyond the OCC's budget to include the costs of "military, diplomacy, foreign aid, homeland security and services to veterans," acknowledging that the costs of war aren't solely encapsulated in the military's budget.

If you're unaware of the full scope of the United States' budget, numbers may feel a bit arbitrary. Perhaps, then, percentages are a bit more helpful: The NPP estimates that 54 percent of all federal discretionary spending was spent on the military in 2015, easily making it the biggest expense in the federal budget.

Just look back at these past couple of weeks and you can see why these amounts are expected to rise. Rumors about a preemptive strike against North Korea combined with recurrent air strikes in Syria next to dropping the "mother of all bombs" in Afghanistan renders a world that feels a lot more tumultuous than usual. War costs are expected to rise to amounts as high as $7.9 trillion by 2053 — money that many American taxpayers would much rather keep in their pockets.

Sure, protecting our country is a must, but these sky-high costs have taxpayers wondering if money's really being invested in the most effective ways.