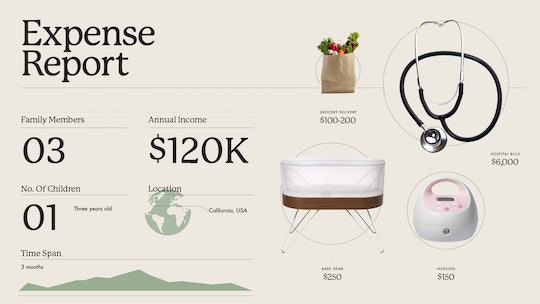 How Much A Family On $120K Spent On Help After Baby

Preparing for the birth of your first child is an intensive process, from ensuring you have an adequate amount of clothes, food and toys readily available to building or purchasing your first crib. But beyond the registry, there’s a significant piece of the expense puzzle: how much it costs for help and time off post-birth.

For Nicole and her husband — parents in California of a now-3-year-old daughter — the post-birth process brought a range of unforeseen costs. From postpartum therapy to finding a nanny, they had to manage the costs of finding help while off work. Thankfully, they were able to secure a steady schedule that allowed them to function as both working and new parents. Here’s how they did it — and how much they spent.

Family: A mother and father

During her 14 weeks of leave, Nicole was still being paid, but only 60% of her normal salary — not only were her expenses much more, but her monthly income was significantly less. Instead of her usual paycheck of $1,400, she was bringing in $840 every week. That left her with an income deficit of $7,840 over the course of her 14 weeks off post-birth.

Three months before giving birth, Nicole and her husband secured a spot in a daycare they loved. The monthly rate (which was higher because infants generally cost more, Nicole explains) was $1,650. They had to pay a $600 non-refundable deposit at the time to secure the spot, and didn’t get that money back when they opted not to send their baby to daycare.

After giving birth, Nicole’s mom came to visit them in California to lend a hand. They realized they would feel more comfortable with her taking on the role of nanny than sending their daughter off to daycare. And so, up for the job as most grandparents would be, Nicole’s mother became the parents’ nanny once they went back to work.

“My daughter was born in June, so she first stayed during summer,” Nicole explains. “And then she was like, ‘All right, I’ll stay until you go back to work,’ which was October, and then it was just until the holidays. And then she just couldn't leave.”

The family worked out an arrangement to pay her $1,450 a month to serve as the child’s nanny, which was $200 cheaper than daycare. This was a particularly comforting situation for Nicole and her husband who, after conceiving their child through IVF, with all the associated difficulties, wanted to ensure their daughter was safe and in the right hands at all times.

“I know that many new parents do not have this option, and I am forever grateful and understand how privileged I am,” she adds.

Supplemental nanny (If grandmother was unavailable): $15 an hour, a total of $120 a day

“I was really lucky through my insurance that they offered me a nurse that would be with you a few months before you gave birth and she would call you and just check in on you,” Nicole explains.

The extra set of eyes and hands was a huge comfort relief. But that nurse began to notice something in Nicole that she pointed out: her high level of anxiety.

After giving birth, Nicole was dealing with an overwhelming amount of anxiety, impacting every moment. Having gone through so much to conceive her child, she was terrified of something going wrong, whether it was putting her daughter in her car seat or going to Target. “I was afraid someone was going to come up behind me and kill me and then take her,” she recalls. “So it was really just wild thoughts.”

Nicole stayed in therapy through her maternity leave and then a month into her back-to-work phase.

Nicole and her husband had to pay $6,000 out of pocket for their hospital stay, and that bill needed to be covered in full within a year. Additionally, her first breast pump broke, and her insurance would only cover the cost of one.

“I spent $300 on a second, $50 for a manual and then when my new breast pump hurt and was uncomfortable to use, I paid $150 for a Spectra pump, which a lot of new moms recommended,” Nicole explains. “With the pump comes bags to store milk, a bag to carry pump and a couple of mini insulated bags/ice-chests to ensure milk stays cold.”

They also soon found out that their daughter had a small hole in her heart that needed to be checked out and examined. And even though a good cardiologist was covered by insurance, they still had to pay a chunk of money throughout that process (about $500).

“A lot of parents put a lot of thought and worry into preparing for the baby with buying so many things, and I was guilty of this, too,” says Nicole. “But you don’t need as much as you think, so [I advise you to stop] worrying about that kind of stuff and maybe putting that money into a little account because you don't know what fees will come up kind of randomly.”

*Note that these are not all designated sleep devices.

If you or someone you know is experiencing depression or anxiety during pregnancy, or in the postpartum period, contact the Postpartum Health Alliance warmline at 1-888-724-7240, or Postpartum Support International at 1-800-944-4773. If you are thinking of harming yourself or your baby, get help right away by calling the National Suicide Prevention Lifeline at 1-800-273-8255, or dialing 911. For more resources, you can visit Postpartum Support International.

More Like This
20 Perfectly Proper Tudor Baby Names
How To Breastfeed A Baby With A Cleft Lip Or Cleft Palate
This Is How Your Water Breaks During A C-Section
Can You Do Zumba While Pregnant? Experts Weigh In