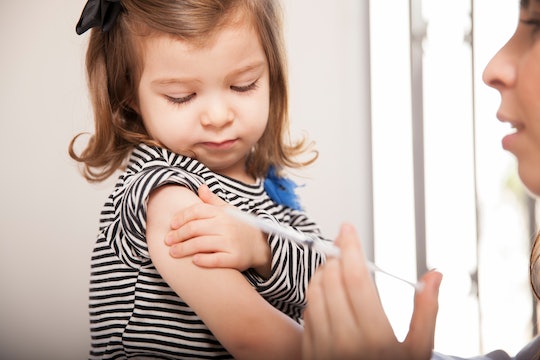 How Much Is A Flu Shot Without Insurance?

Flu vaccines can save lives, literally. Just that one prick per year can shield kids and parents alike from ending up sick and missing school or work — or even hospitalized — when the flu season rolls around soon, rendering so many ill. Still, any medical intervention, especially one that every member of the family should get, might call to mind fears of a potentially hefty price tag. That's especially true for Americans who may not have the safety net of a reliable health insurance plan to fall back on. So, how much is a flu shot without insurance? The good news is that affordable flu shots are about as ubiquitous as they are necessary.

It's generally accepted that October rings in flu season in the United States, and that it doesn't wrap up until the following May. And the illness is insanely contagious, leaving young kids susceptible to picking it up as they go about their day-to-day business. So, the American Academy of Pediatrics strongly recommends that anyone 6 months and older get vaccinated annually in an effort to keep cases to a minimum. The academy reported that thousands of children were hospitalized for flu-related reasons during the 2016-17 season, and that more 100 died. A tidbit to drive home the point that flu shots are vital: Eighty percent of the kids who died had not gotten their vaccinations.

But harping on the importance of a vaccine is pointless if people can't afford it. Luckily, you probably can. First, those who do have insurance coverage can get their yearly vaccines at no out-of-pocket cost in most situations thanks to the Affordable Care Act, which mandates that preventive care be completely covered. That's awesome news, and makes failing to get a flu shot by the end of October, as the Centers for Disease Control (CDC) suggests, pretty much inexcusable for much of the population.

As for those who don't have health insurance? Never fear, because there are still lots of accessible options. Availability likely won't be an inhibitor, as, according to TIME, anyone who wants a flu shot can get one by visiting their doctor, heading to the local drug store, taking advantage of a nearby urgent care clinic, or simply incorporating it as part of a trip to a retailer such as Walgreens, CVS, Target, Walmart, and Kroger.

Prices can vary depending on where you go and what version of the vaccine you opt for. At Walgreens, for example, the Fluzone PFS vaccine, which is good for ages 3 and up, costs $39.99. The one that listed as appropriate for kids who are 4 years old and up, Fluvirin, sells for a little less at $31.99 per dose. The website 20somethingfinance.com reported that the cheapest place for the uninsured to secure a flu shot this year is Costco, where standard trivalent costs just $14.99. At Walmart, the same form of the vaccine reportedly goes for $27.88. According to the CDC, one dose of the vaccine Fluzone Quadrivalent — which is safe for babies as young as 6 months old — is worth about $17 per dose in the private sector.

There are a lot of options and prices out there when it comes to flu shots, so it's definitely smart for parents to do their research and even consult with their doctors when coming to any decisions. Doing so will leave you with a lot less worry and stress, and free up the whole family to focus on planning fun fall activities like jumping into piles of leaves and heading to the pumpkin patch.