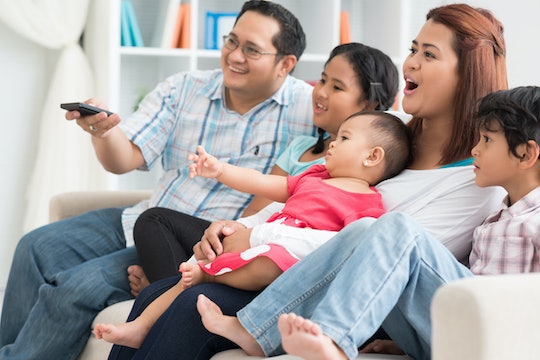 Apple's New Streaming Service Might Be More Affordable Than You Expected

As Apple TV+ prepares to officially launch this fall with highly anticipated new shows — one of which stars an all-star cast including Reese Witherspoon, Jennifer Aniston, and Steve Carell — people are understandably curious about the new streaming service. Perhaps most importantly, the question of how much Apple TV+ will cost is likely on many people's minds as it may be their bottom line on whether or not they sign up for the service. The good news is, as a new report suggests, that the price will likely be pretty comparable to other streaming services.

While Apple has yet to announce anything official, analysts predict that the company is planning to launch the Apple TV+ movie and TV subscription service in November with a free trial period followed by a $9.99 per month price tag thereafter, according to Bloomberg. The streaming service will reportedly be available globally in over 150 countries and accessible through the Apple TV app. And unlike Hulu and other streaming services, Apple TV+ will reportedly not charge extra for an ad-free version of the service, as it will simply "have no ads," according to Newser.

The reported cost of Apple TV+ should fall right in the middle of Netflix's basic plan at $12.99 and Disney Plus at $6.99, according to CNET. The cheapest price point goes to Hulu at $5.99 for its starter plan, though more expensive plans are available for no ads and live TV, for example.

Adding another streaming service to the mix isn't ideal, of course, as it means another bill to pay each month. But it's become the norm for many families; in fact, the average American subscribes to a little more than three services and pays an average $8.53 per month, per service, according to Forbes.

If Bloomberg's report of a $9.99 price tag ends up being accurate and if you're still wondering whether Apple TV+ is worth it for you, you may want to consider the content that's expected to drop on the service this fall. In November, according to The Verge, Apple TV+ will start with a small selection of shows and expand offerings monthly as it bulks up its television and movie library, and has so far teased two original shows, including The Morning Show, a drama about a morning news broadcast starring Witherspoon, Aniston and Carell, as well as For All Mankind, a period piece that presents an alternative history in which Russian put the first person on the moon.

There are a few other noteworthy shows that will debut on the streaming service. There's See featuring Jason Momoa, Truth Be Told with actress Octavia Spencer, Steven Spielberg’s revival of Amazing Stories, and a documentary series called Home. Apple has reportedly committed $6 million towards original content for the new streaming service, according to Business Insider, so hopefully there's lot of good stuff to come.

Fortunately, potential subscribers have a couple months to decide if they want sign up for another streaming service or swap it for another subscription.