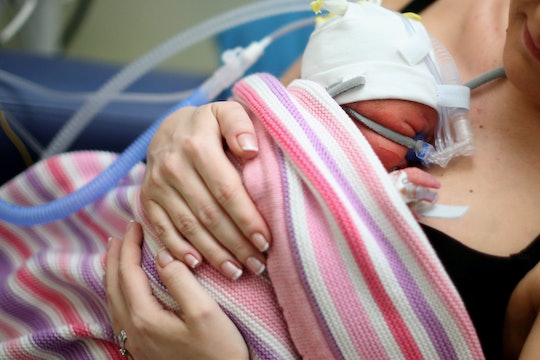 How Much Is Maternity Care Without Insurance?

Having a baby is definitely an immense financial undertaking. Not just the giving birth part, but the whole business of taking care of a newborn in general, and then the costs of raising a kid through to adulthood (and sometimes supporting them for awhile after that). And not everyone is lucky enough to have insurance that will cover some of those early costs. It's not an uncommon action for expectant mothers, or those trying to become pregnant, to research the costs of maternity care without insurance, especially with how confusing the current conversations about insurance and health care can be.

According to Vox, researchers have estimated the cost of a pregnancy and delivery in the United States to be up to $20,000 — for a normal birth — if someone doesn't have insurance coverage. And before the passing of the Affordable Care Act in 2010, "the vast majority of plans on the individual and small group insurance markets didn’t consider maternity coverage as an essential health benefit."

Obamacare has brought down many costs involved with maternity care. Vox reported that, "the law required insurers offering individual and small group insurers to cover a list of 10 'essential health benefits' — which included pregnancy and maternity health care." The ACA also put a limit on the out-of-pocket expenses or deductibles families might have to pay for their care.

Let's break down some of the costs of maternity care.

According to The Bump, a website that, "gives first-time millennial parents the lowdown on fertility, pregnancy, birth and babies" from the creators of The Knot, prenatal health care and delivery costs vary drastically. The website reported that those costs without insurance can actually range from about $9,000 to more than $250,000 — my guess is that higher number involves births that are not considered "normal" by those previous researchers.

The site also reported that back in 2010, only 12 percent of individual policies offered maternity coverage. It's sometimes possible to purchase a rider to cover maternity expenses, but the site reported that that extra cost can be high (reportedly up to $1,100 a month). So yea, having a baby without insurance coverage can be pricey.

Another pregnancy information website, WhattoExpect.com, reported that labor and delivery are some of the most expensive health care costs in the United States — and that without adequate insurance coverage, "they can cost tens of thousands of dollars."

Dr. Leana Wen wrote a commentary over on NPR breaking down what her own costs for pregnancy, labor, and delivery would be without insurance, and the numbers are eye-opening. She wrote:

One obstetrician visit would cost $150. With an ultrasound each time, it would be $400. A Pap smear would cost $53. One set of blood tests would add another $300. All told, my prenatal care with all visits and tests included would be over $10,000. This is not counting labor and delivery, which in my area is estimated to be up to $30,000 for a vaginal birth and $50,000 for a cesarean section.

And skipping some of the prenatal care to cut costs should never have to be an option. Wen also wrote that, "women without prenatal care are seven times more likely give birth to premature babies, and five times more likely to have infants who die." According to her and the NPR piece, the average medical cost for a baby with medical issues as a result of prematurity is $79,000, as compared to $1,000 for a "healthy" newborn baby.

She went on to conclude that hospitalizations for a preemie baby in the first year of life, "can be upwards of $500,000; intensive care can cost in the millions."

The truth is, the costs of maternity care, if not covered by insurance, can vary widely. Like, really really widely, depending on the health of the mother and baby, and the circumstances of the birth itself.

Luckily, the Affordable Care Act has eased some of those costs, but it can still be a not-inexpensive undertaking to have a baby. The costs above don't even necessarily take into account costs of fertility treatments that some women may go through in order to get pregnant in the first place, and there's a whole other world of information available when it comes to adopting or fostering a child.

Suffice it to say, maternity care without insurance is not cheap. Having a baby isn't cheap. They're lucky they're cute, huh?