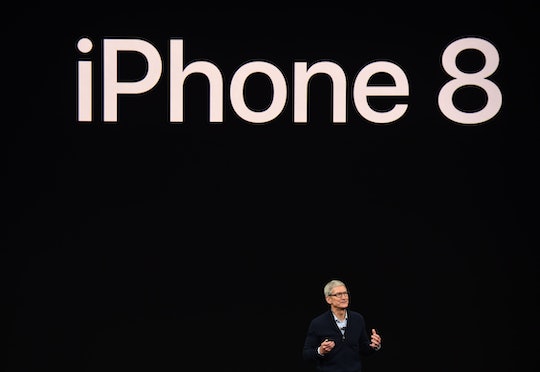 Here's How Much An iPhone 8 Wireless Charger Will Cost You

Apple announced the release of the iPhone 8, iPhone 8 Plus, and the iPhone X on Tuesday. And technology geeks everywhere rejoiced. One of the most talked-about features of the new devices is the ability to wirelessly charge the new iPhones, which is something some other mobile phones have already been able to do but that Apple hadn't quite gotten to with their iPhones before Tuesday. But in order to charge the phones that way, people are going to need a charging pad. How much is the iPhone 8 wireless charger, and will you absolutely need one to charge your fancy new iPhone?

The new iPhones feature a glass back to allow for inductive wireless charging, which wouldn’t have been possible through the aluminum shell of the old model, according to The Verge. All anyone has to do to begin charging their new iPhone with a wireless charging pad is place the phone on the device, and it’ll charge.

That means no more fiddling around with charge cords, unless you need to be actively using your phone while it's charging (since having the phone flat on the charging pad would make that a little more difficult, though not impossible). Plus, with this new feature, iPhone users can wirelessly charge their phones and still have the Lighting port free to use wired headphones at the same time. Yay, technology.

The iPhone 8 now supports wireless charging, just like many Android devices already on the market, according to Tech Crunch. In fact, that feature wasn't necessarily a deal-breaker when it came to my own decision to switch from an iPhone to an Android, but it was indeed a nice bonus. Now, iPhone users will also be able to experience how convenient wireless charging is — not to mention, they might save a little money by not having to replace charge cords that go missing or get damaged.

The new iPhones will use the Qi standard, which is also used by other smartphones, to wirelessly charge, according to CNBC. Even though any certified Qi charging accessories are reported to work with the iPhone 8, Apple also announced its own wireless charging mat on Tuesday. Dubbed the AirPower, the mat can hold and charge several Apple devices at the same time, according to Mashable.

So just how much is the iPhone 8 wireless charger? As it turns out, the AirPower will not be released until next year, according to Tech Crunch. That means people who get the iPhone 8, 8 Plus, or iPhone X anytime soon will have to wait until 2018 to own an AirPower as well, which might be disappointing for Apple fans who like to have as much official merchandise from the company as they can get their hands on.

It's not yet clear how much the AirPower will cost when it does finally launch next year, according to ZDNet. And Tech Crunch predicted that how many AirPowers Apple sells might depend on the pricing. Since the new devices can reportedly wirelessly charge without an official Apple AirPower charging pad, some people might opt to stick with devices that come from other manufacturers and retailers, instead.

A search for "wireless charging pad" on Amazon on Tuesday brought up Qi charging pads that range from $7 into the hundreds of dollars, depending on what device you're trying to use it with and what brand you go with. However, in the past, some critics have claimed that Apple products tend to be expensive, as compared to similar products from other companies. So people waiting to purchase the AirPower might want to save up a little bit extra, just in case.

There's unfortunately no set price on the AirPower — Apple's new wireless charger for the iPhone 8, 8 Plus, and iPhone X — just yet. But if Apple fans are willing to wait for it to launch, hopefully the price doesn't empty their wallets too much.