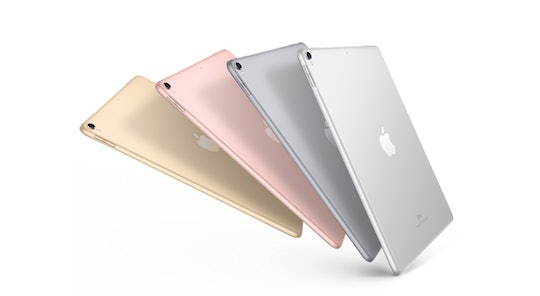 Is The New iPad Pro Kid-Friendly?

Another day, another beautiful new product from Apple, perfectly designed to take over your life. The tech giant announced the new iPad Pro on Monday at its Worldwide Developers Conference, and the product will start shipping next week. But how much is the new iPad Pro? And more importantly, is it kid-friendly? It just might be the most expensive kid-friendly toy your child will ever break.

The biggest change in the new iPad Pro seems to be the screen. The device itself is almost the same size and weight as Apple's older 9.7-inch Pro model, but developers have made its screen so much bigger by removing the bezels, or rims, along the perimeter of the iPad. Plus, the new iPad Pro is apparently super-fast, really easy to use with Apple Pencil, and big enough for a full-size on-screen keyboard, so you won't have to adjust your typing from what you do on a normal computer.

Okay, okay, you may be thinking, that all sounds great, but can I give it to my kid and trust that he or she won't immediately be able to download inappropriate things and/or spend all my money on in-app purchases of extra donuts in Bakery Bonanza, or whatever app is popular right now?

Well, Apple's press release didn't make any mention of changes in parental controls settings, so it seems like those controls will probably be staying mostly the same.

And as of now, the iPad has some great protective measures in place, and they're pretty easy for parents to implement. The Apple website has an easy step-by-step guide to enabling parental controls, and restricting certain apps and features, while Lifewire has a helpful guide to child-proofing your iPad.

Of course, preventing your toddler from downloading the entirety of Nicki Minaj's oeuvre or getting the most violent games on the app store doesn't mean that he or she won't whack that beautiful big screen against a wall until it cracks. For that, you'd better check out the best child-proofing cases, spend a lot of time going over the meaning of the word "gentle," and hope for the best.