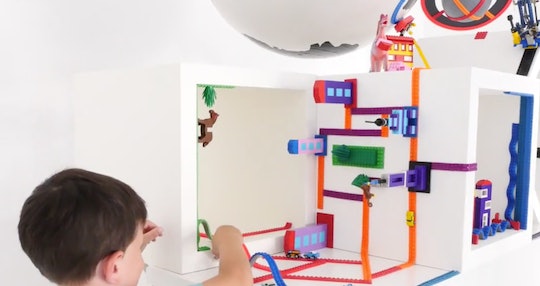 How Much Is The Nimuno LEGO Tape?

There is nothing more amazing than a child's imagination. Kids have such incredible creativity that they're able to imagine things far more special than some adults. This creativity inspires them to paint pictures worthy of putting in their own Metropolitan Museum of Art or build cities out of LEGOs rivaling the skyscrapers in New York. One new product, the Nimuno LEGO tape, will only continue to inspire this amazing creativity. And by the speed this product will fly off shelves, it will soon have parents wondering how much is the Nimuno LEGO tape?

The Nimuno tape is an adhesive building tape — with building blocks on one side and adhesive on the other — that allows itself to be cut and repositioned, and is compatible with other toy brick building systems such as LEGOs, according to Digital Trends. This allows for some serious growth of LEGO cities and villages on not only typical flat surfaces but walls and curved surfaces, too. It's flexible, colorful, and challenges children to think outside the box. Fortunately, parents will not have to tap into savings to purchase the Nimuno LEGO tape, unlike 2016's trendiest toy, Hatchimals, which went for insanely high prices around Christmas time. This toy, which first gained attention on the crowdfunding website, IndieGoGo, is something that all generations and all ages will enjoy using and playing with — its a seriously awesome concept. But most importantly, the toy is super affordable.

Parents can purchase the Nimuno tape by the roll on IndieGoGo, which all depends on the price. Two rolls of 6.5 foot tape will cost buyers $13 whereas four rolls of tape will cost those interested in it for $26. Not too bad for something that will more than likely entertain your kid for hours. Unfortunately, those who order the tape now won't be able to get their hands on it until August, when the orders ship.

The best part about the tape is that its portable — it sticks to any surface, and can be cut at any length, it can go just about anywhere, serving as a great hands-on alternative to electronics. Most importantly, its stick-ability and flexibility makes it much harder for parents to step on that dreaded errant LEGO (and avoid the pain that comes with it).

If people don't mind waiting a few months, the Nimuno tape is well worth the reasonable, pre-order cost. It's a fair exchange for an incredibly fun way to keep your child occupied and exercising their creativity.