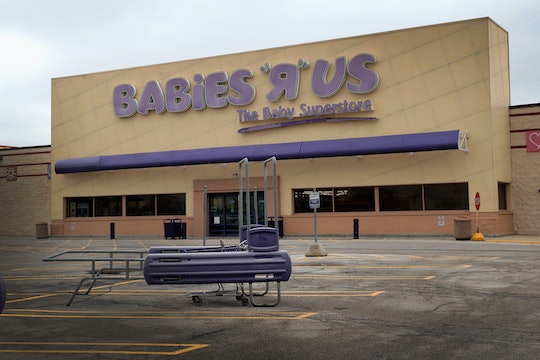 News of the imminent closing of Babies "R" Us and Toys "R" Us stores in the United States has created quite a stir this week among everyone from economists to nostalgic grandparents. It is definitely a noteworthy moment in U.S. consumer history, as the chain has been an iconic favorite of the past few generations. But if you are one of the many parents who have recently purchased or been gifted items from the baby store, you might be worried. How much longer can you make returns to Babies "R" Us? Because you don't want to miss your window.

When I took the question to a Customer Representative in a live chat on the Babies "R" Us website, she said that all returns nationwide will continue to be made until April 15. Nearly a month from now should be plenty of time if you already have the item in your possession, but could pose a problem for those mamas-to-be who have baby showers in the next few weeks and will be facing that deadline shortly after receiving their gifts.

It may be the epitome of the joke, "first world problems," but the short time frame is still a major inconvenience for those affected. Now is about the time those women wish they had registered at Target instead, because we all know Target ain't going anywhere.

Speaking of registries, what does the future look like if you happen to have already registered at Babies "R" Us? According to People, the baby registry system will be left up indefinitely, along with the online store, because the company is hoping someone will buy the asset.

Gift cards will be accepted until April 15, and if you already have one you've been waiting to use, luck may actually be working in your favor here. With the news of the Toys "R" Us and Babies "R" Us closures, CNN predicted that consumers can expect potentially high discounts as the toy store liquidates. Some are calling for the retailer to exchange customers' unused gift cards for cash, but analysts say that would be highly unusual and not likely in a bankruptcy case such as this one.

Although no timeline of sales has been publicized yet, shoppers can likely expect prices to start off minimally cut and become more drastic as the weeks go by. Of course, if you wait too long for the deepest discounts, you run the risk of also missing the best products.

One interesting factor in the Toys "R" Us and Babies "R" Us closings is the correlation to our nation's declining birth rate. The Washington Post reported on what this could mean for the economic future of the United States and it doesn't look good. According to the Post, Toys "R" Us stated, "Most of our end-customers are newborns and children and, as a result, our revenue are dependent on the birthrates in countries where we operate. In recent years, many countries’ birthrates have dropped or stagnated as their population ages, and education and income levels increase. A continued and significant decline in the number of newborns and children in these countries could have a material adverse effect on our operating results."

The article continued on to explain that the financial hardship felt by infant and kiddie retailers may be a foreshadow of what's to come in the future as the smaller population becomes the mainstream market, because for a country to prosper economically it must be growing in numbers. With more Americans delaying or avoiding having children, our marketplace could very likely be on track to take a major hit in a few decades.

So even if the closing of Babies "R" Us is a bummer for you, new parent, the rest of society appreciates you for reproducing anyway. Thank you for keeping us financially viable.