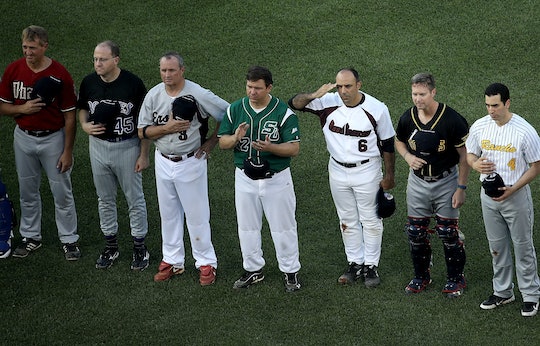 Democrats defeated Republicans 11-2 in the 2017 Congressional Baseball Game Thursday evening at Nationals Park in Washington, according to CNN. The annual tradition took on another layer of meaning following Wednesday's shooting in Alexandria, Virginia, during which a gunman opened fire at the Republican congressional baseball practice. House Majority Whip Steve Scalise and three others were shot in that incident, but lawmakers took the field proudly on Thursday in defiance of the attack. So how much money did the Congressional Baseball Game raise, anyway? Actually, the number is extremely impressive.

According to the Los Angeles Times, the event sold a record 25,000 tickets, and the Congressional Baseball game raised $1 million. That's certainly nothing to sneeze at. And the shooting was clearly heavy on the minds of both the players and the attendees of the competition — because the Los Angeles Times reported that many fans, including Democrats, carried signs that read "Scalise Strong" or "Geaux Scalise," and that members of Congress from both major political parties wore Capitol Police and Louisiana State University hats to honor Scalise's alma mater.

And although a Washington hospital announced during the game that Scalise remained in critical condition, according to the Los Angeles Times, a Capitol Police officer who was injured while trying to stop the attacker threw out the ceremonial first pitch at the game, entering the field on crutches to a standing ovation. So the victims were represented and honored at the event nonetheless.

CNN reported that interest in the charity baseball game "skyrocketed in the aftermath of the shooting," so staffers and legislators wanted to show solidarity with Scalise and the three others who were shot. The victims of the shooting included a congressional staffer, a lobbyist, and a Capitol Police special agent.

The New York Times reported that the Congressional Baseball Game has been played since 1909. Before this year's game, the sides were even for wins, 39-39-1, before the Democrats were victorious on Thursday. But things felt different this time around for everyone involved.

We won because we’re here. We’re not being visited at a wake somewhere. And that was the reality of what could have happened. Fortunately only the shooter is dead. None of our folks are. There were some miracles happening on that field.

The camaraderie didn't end when the game was over. According to CNN, after the game, when Democratic manager Pennsylvania Rep. Mike Doyle was presented with the winning trophy, he called the Republican manager, Texas Rep. Joe Barton, to join him. Then, Doyle gave the trophy back to the Republicans to put in Scalise's office.

Arizona Sen. Jeff Flake, a Republican, summarized the feelings of many at the event, and the spirit of that trophy trade-off, when he said to CNN:

As far as winning and losing, I think that's far from anybody's mind right now.

And the spectators of the sporting event seemed to feel the same. Dennis Pritchett, a civil engineer and a Republican, told Time that, "After what happened yesterday, I just wanted to show my solidarity." He then amusingly added:

I don’t care who wins. If it’s not the Baltimore Orioles, I don’t care.

The Congressional Baseball Game on Thursday truly proved the age-old saying that goes, "it's not whether you win or lose, it's how you play the game." Both sides played for both sport and solidarity, and it showed.