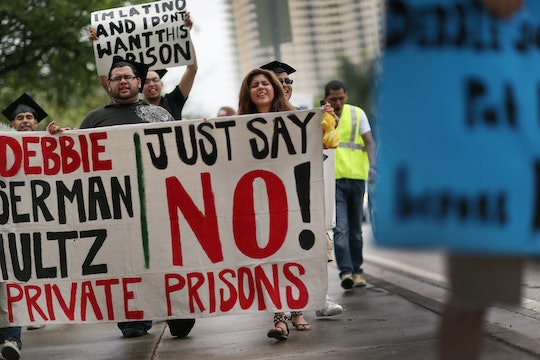 How Much Money Do Private Prisons Make? They're Earning Thousands Per Inmate

On Thursday, the Justice Department announced that it will discontinue contracting with private prisons. The announcement comes on the heels of a damning report by the Office of Inspector General that found that private prisons were less safe, less effective, and more expensive than government-run facilities. When you look at how much money private prisons make, it's easy to see that privatizing corrections was never a good plan.

Mother Jones has long been sniffing around private prisons (culminating with a journalist publishing an exposé after a four-month undercover investigation in the prison system), and recently, it reported that Corrections Corporation of America, the second-largest for-profit prison system in the country, netted $3,300 per prisoner in 2015. A 2012 contract between the Arizona Department of Corrections and MTC, another private corrections company, guaranteed a rate of nearly $18,000 per prisoner per year, according to Think Progress. What's more, many private prisons have guaranteed occupancy clauses in their contracts, generally ranging from 90 to 100 percent, meaning that if cells aren't filled, the states must pay anyway, which smells a lot like an incentive to imprison people who maybe don't need to be imprisoned? But what do I know, I'm not an economist.

Private prisons currently house approximately 22,660 federal inmates, according to the DOJ report, which translates to roughly 12 percent of the total inmate population. The Bureau of Prisons paid $639 million to private prisons in fiscal year 2014, averaging $22,159 per prisoner. For perspective, that's about the same amount it would cost to send three people to a state college. Now, I'm not outright saying that low-level drug offenders should be sent to college instead of prison... but I'm not not saying that, either. Just crunching some numbers.

The BOP currently has contracts with 13 private facilities, according to the Washington Post, and while those contracts won't immediately be terminated, they're all coming up for renewal within the next few years. Some contracts will not be renewed (one such contract for 1,200 beds ended three weeks ago, according to Deputy Attorney General Sally Yates' memo), and others will be reduced, with a goal of eventually ending the BOP's reliance on contract prisons entirely. Private prisons, wrote Yates, "simply do not provide the same level of correctional services, programs, and resources; they do not save substantially on costs; and as noted in a recent report by the Department's Office of Inspector General, they do not maintain the same level of safety and security." She noted that they also can't match the BOP's educational and rehabilitative services, which are "essential to reducing recidivism and improving public safety." Those are some pretty compelling reasons to give them the boot.