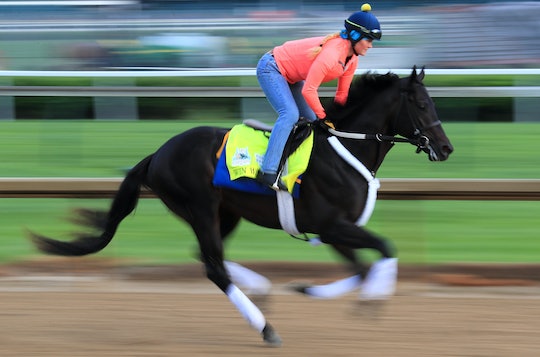 The Kentucky Derby Prize Increased By A LOT This year

The Kentucky Derby is known as the most exciting two minutes in sports. This year, on May 4, 20 horses and jockeys will vie for the wreath of roses that gets draped around the winner. And how much money does the 2019 Kentucky Derby winner get? It’s a purse that is well worth the hard work that goes into training.

For the 145th running of the Derby the total prize money has been increased to the incredible sum of $3 million. That’s a jump from the $2 million that has been handed over to the winners since 2005, according to Sporting News. First place wins $1.86 million dollars. The second place horse receives $600,000, third place is given $300,000, fourth earns $150,000, and $90,000 goes to fifth place. Shockingly, the jockeys only take home five percent of the prize money, the outlet reported.

The racetrack in Louisville, Ken., Churchill Downs, can afford to hand over those high prizes since about $200 million was legally bet on the race in 2018. As Money magazine reported, the monetary numbers may seem pretty high, but the Derby is a place where money is no object. The signature drink for the event, the mint julep, retails for $11 at Churchill Downs, but there is also a limited-edition of the cocktail that goes for $1,000.

The Derby is the longest running sporting event in U.S. history, according to History.com, beginning in 1875. It was the brainchild of Meriwether Lewis Clark Jr., the grandson of William Clark from the Lewis and Clark expedition. Inspired by horse racing he’d seen in Europe, Clark raised the funds to build Churchill Downs.

10,000 people attended the first derby in 1975 which hosted 15 horses running 1.5 miles. In following years, complaints from owners and jockeys caused the distance to be shortened to the current length of 1.25 miles.

Race horses for all the Triple Crown races – which include the Derby, the Preakness, and the Belmont Stakes – are all three-year-old thoroughbreds, so they can only run the Kentucky Derby once in their life. That tradition was leftover from racing in Europe where 3-year-old races are common. Slate explained that the age restriction is thought to provide the most exciting events since horses reach maturity around four years of age. Watching a race of two-year-olds would be akin to watching the JV team, they explain. And by four years old it will already have become clear which horses are the real racing standouts. So three years old is the sweet spot.

You may have wondered how the horses get to the famous race. After all, they’re trained all over the country. While driving to the track makes some amount of sense, some owners opt for a faster means of transit. A freight airplane recently landed in Louisville with 12 horses intended to run the Derby, and its companion race the Kentucky Oaks. Called Air Horse One, the flight company's head of operations told Cnet, “It’s just a regular freight airplane but it becomes specialized when we install the horse stalls, the containers that hold the horses during flight.”

That would be a fun flight to sneak onto! Alas for most of us we have to settle to watching these master athletes compete for glory on TV. Look for the Kentucky Derby on NBC, May 4.