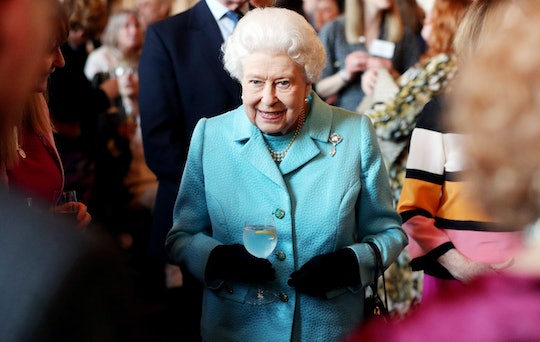 The Queen Is Definitely Not Strapped For Cash, In Case You Were Worried

If there's one thing the royal family isn't, it's strapped for cash. As a whole, the British monarchy is said to be worth about $88 billion, according to a report from CNN Money. While that figure is impressive, each individual member of the royal family is also worth an astounding amount. So, how much money does the Queen make?

While the Queen is indeed wealthy, there are about 320 British people richer than Queen Elizabeth II, according to the Sunday Times. CNN Money estimated that she's got a net worth of about $470 million and Fast Company reports it's $425 million, and she and her son Prince Charles make the majority of their money from the government and private estates.

The Queen's main sources of income, CNN Money reported, are the Sovereign Grant, the Duchy of Lancaster, and her own personal property and/or investments. The Sovereign Grant is an annual lump sum of money from the government provided by taxpayers, according to CNBC. According to CNN, it functions as a sort of expense account for the Queen to cover the costs of travel, security, staff, and upkeep on her palaces.

Forbes estimated that the Queen's properties are worth a pretty penny, making up a large portion of her net worth. According to the outlet, Sandringham House and Balmoral Castle are valued at a combined price of more than $104 million. Additionally, she owns agricultural land around England and pricey buildings in the nation's capital, according to Business Insider.

Some of the Queen's assets and investments include homes, jewelry, and horses, Hello! Magazine reported, also noting she earned about $8,760,000 from her horses over the last 30 years. Hello! Magazine reported that the majority of the money goes toward the horses' trainers, however. As for her jewelry collection, The Daily Express reported that the crown jewels are among some of the more expensive pieces in her collection. Per the outlet, they're estimated to have a value of about $6.5 billion, and the largest gem on the crown jewels, the Cullinan I diamond, is valued at around $522 million alone.

While the Queen is well off, the royal family also contributes significantly to the economy. According to Brand Finance, the monarchy contributed more than $2 billion to the United Kingdom's economy in 2017 by promoting tourism, retail, fashion, and more. The royal wedding of Meghan Markle and Prince Harry alone boosted the economy by nearly $1.3 billion, according to the site.

According to a report from the Evening Standard, Queen Elizabeth II is known for being frugal despite her wealth, noting that she's been using the same $39 heater and $10 nail polish for three decades. Additionally, Reader's Digest reported that biographer Kate Williams revealed in a book about the Queen that she's notorious for reusing wrapping paper and ribbons on gifts, though the royals don't exchange Christmas presents.

Royals, they really are just like us. Queen Elizabeth II may have more money than most could ever dream of having, but she does occasionally enjoy some very normal, and affordable delights in life.