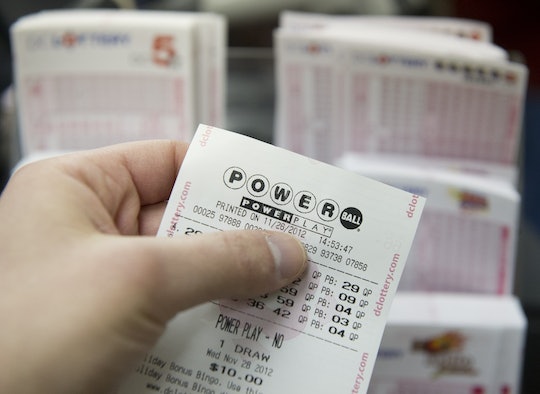 How Much Money Will The Winner Of The $900 Million Powerball Actually Get?

Have you bought your Powerball ticket yet? The current $900 million jackpot has broken records to become the biggest Powerball jackpot yet. Since Nov. 7, the jackpot has rolled over an astonishing 18 times as no one has yet claimed the prize. The rollovers, combined with a rush of Powerball ticket sales this past week, have pushed the jackpot up to nearly $1 billion. But even if you think you have the winning ticket, don't go spending all your millions yet: how much money will the Powerball winner get of the $900 million prize? After taxes, you'll be coming home with a lot less dough than you think.

First, let's take a look at how likely you are to even win the Powerball lottery. Gary Grief, executive director of the Texas Lottery, told the AP “You can throw out the logic. You can throw out the statistics. We’ve never seen jackpots like this. It’s a new experience for all of us.” That said, the statistics nerds over at FiveThirtyEight have calculated that there is a 77 percent chance there will be one Powerball winner, based on historical turnout. They've also estimated that around 428 million tickets have already been sold — and that was just based on the $800 million jackpot.

So let's say you win it all: How much money will actually fill up your Scrooge McDuck-like money vault?

A lump sum payment (and experts agree: always take the lump sum when you win the lottery) from the $900 million jackpot comes out to $558 million. After taxes, that means your lump sum riches would only be about $419 million.

If you do win, don't go blabbing about it on Facebook right away. Here's what you need to do if you win the Powerball lottery: Hire a lawyer, estate planner, and financial advisor. Sign that ticket and put it in a safe place. Did we mention don't tell anyone yet? No seriously: Don't tell anyone. You'd be surprised who will come out of the woodwork to get even just a glimpse at your $418 million lump-sum-after-taxes jackpot.

The Powerball drawing will be held at 10:59 p.m. Eastern on Saturday.

(But I'm totally going to win, so like, don't even bother checking your tickets tonight.)