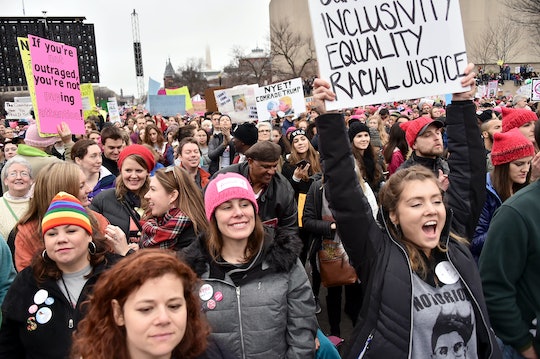 How Much Of The Workforce Do Women Make Up?

After huge women's marches happened in January, there was no way International Women's Day was going to be a quiet one this year. Women across the country are striking by taking the day off of work on March 8 in order to show how much women contribute to the workforce. So exactly how much of the workforce do women make up?

According to the U.S. Department of Labor, women make up 47 percent of the workforce. There are 74 million full- and part-time female workers. The economy would be in sheer chaos if that many people didn't show up to work, because without working women the economy would be $1.7 trillion smaller, The New York Times reported.

The women's strike, which is known as "A day without a woman," is meant to highlight the economic importance of women in the workplace, as well as to call attention to issues women face at work, including the wage gap, sexual harassment, and pregnancy discrimination, among others. "This is about showing what society looks like when women don't actively participate in it," Women's March organizer Bob Bland told Vox.

For many women, the strike is important in face of the Trump Administration, which has threatened reproductive health, LGBTQ rights, and immigrant rights.

Senior Staff Attorney Jessica Stender of Equal Rights Advocates, which is participating in the strike, talked with Romper about some of the other important workplace issues affecting women. She says:

There are substantial barriers to women’s economic security and success in the workplace that we hope to call attention to during the national day of action. [For example], there is no right to paid leave at the federal level,... making it impossible for many workers to take time off work during such critical times. Even the little that we do have — federally mandated job-protected, but unpaid leave — leaves out millions of women.

The Women's March has some guidelines about how to participate in the women's strike:

Women take the day off, from paid and unpaid labor

Avoid shopping for one day (with exceptions for small, women- and minority-owned businesses).

Wear RED in solidarity with A Day Without A Woman

Those last two are especially important for women who can't afford to lose a day's pay or would risk losing their job to strike. Not buying your daily Starbucks iced coffee or lunch from Chipotle is another way to show support for women's issues in the workplace. And for women who normally brown bag it because they can't afford to spend money on lunch everyday, even wearing a red blouse or pin is a quiet way to express your solidarity.

For those who want to take off for the day, the Women's March organizers have prepared a template letter women can give to their bosses.

What will be interesting is how much certain businesses will be impacted by these strikes. While some fields have been traditionally associated with women and are known as "pink collar" jobs — such as teachers and nurses — women also make up 98 percent of speech pathologists and 60 percent of pharmacists, according to the Department of Labor.

Several schools will close on International Women's Day because many female teachers said they would participate in the strike, The Huffington Post reported.

Over at The LA Times, Meghan Daum wrote that the women's strike is for privileged women who aren't working to support themselves and their families. While it is true that privileged women will have an easier time taking a day off from work, intersectionality is an important part of the strike: "Those of us who are able to strike on March 8 are striking on behalf of those who can't," Bland told Vox.

And Daum's assertion that "A day without women" is based on the premise that "women are expendable" makes no sense. Women do know their worth. That's why they're striking.