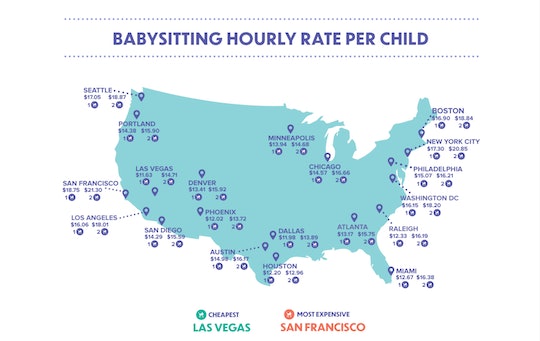 For many parents, hiring a babysitter can be a catch-22 of sorts. On one hand, they desperately need a date night — or maybe even just an opportunity get things done around the house without having to constantly break up arguments. Except, the going rate for babysitters in some regions can be a deal breaker. Because on top of the cost of date night, parents would be shelling out more than they can afford for someone to watch their kids. In fact, how much parents pay for childcare and babysitters in 2019 will shock you.

Each year, UrbanSitter carries out a national childcare rate survey — and it recently released the data for 2019. A total of 28,000 families from across the nation participated this time around, according to a news release. So what is the going rate for childcare these days, anyway? Drum roll please... The national average is $16.75 per hour for one child, $19.26 per hour for two kids, and $20.76 per hour for three kids.

If you're anything like me, you're probably sitting there going, "What?! Is dinner and a movie away from the kids really worth it?" The cost of hiring a babysitter for date night — on top of the cost of the food, movie tickets, and overpriced theater snacks — could easily set you back hundreds of dollars. (In my case, even more, because I have four kids.)

UrbanSitter also surveyed 1,000 parents to learn more about what's important when it comes to hiring a babysitter — as well as how much they spent each year on sitters, according to Red Tricycle. Here are a few highlights for your amusement, according to a news release from UrbanSitter:

This, my friends, is exactly why my husband and I went on one measly "date night" during our oldest child's first year of life. It's also why we decided to move closer to family; we simply couldn't afford it. These days, we're incredibly lucky to live only a few blocks from my in-laws — who gladly take three of our four kiddos for a few hours at a time. (The baby is breastfeeding and still tethered to me for the time-being.)

My family is also lucky in the sense that my husband and I are able to have work schedules so that one of us is always with the kids — meaning no regular childcare costs. Considering 42 percent of families in UrbanSitter's survey spend between $10,000 and $30,000 per child per year on childcare, I know we're saving a ton in that area, too.

I realize most people aren't as fortunate as I am in the childcare department. But seeing the rates laid out there so nicely is truly shocking. Can we seriously bump up the minimum wage already? And maybe make it so quality childcare doesn't eat up such a large percentage of parents' income? Thanks.