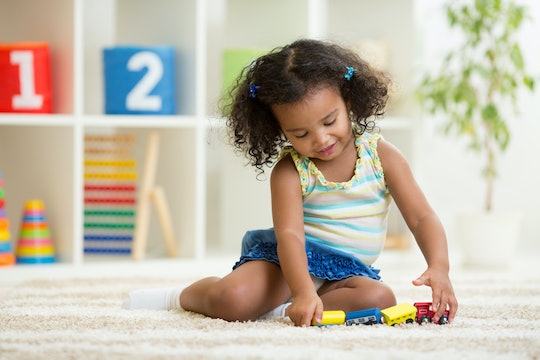 You Know Playtime Is Important For Your Kid, But Here's How Much They Actually *Need*

Let's face it, we live in a world dominated by tablets, iPhones, television, and all manner of electronic devices. It's easy just to hand one over to your child and allow them to be swept up in the displays that seem to keep them rapt and quiet for long stretches of time. But that might not be the best thing. Kids need to play. It's as simple and as complex as that. Which begs the question, how much playtime does a child need, and does the manner of play matter? Is one kind of play superior to all the others?

Play is crucial in all areas of development for children, noted the American Academy of Pediatrics (AAP). Play assists in the development of language, spatial awareness, cognitive function, higher reasoning, social awareness, emotional intelligence, and serves to develop healthy habits that not only stave off obesity as a child but continue throughout their adult lives. The AAP wrote on its website that ideally, at minimum, children should receive 30 minutes of instructor or parent-guided play each day, and at least one hour of unobstructed, uncomplicated free playtime.

That is just the minimum amount of time required to show progress in the children. Other studies, like that from Dr. David Whitebread, don't give it such delineated bullet points. Instead, his article suggests a radical transformation of our current thoughts on the subject to allow a great deal more playtime for students during the day.

As a matter of course, I hate articles that navel gaze about "when I was their age," but it seems almost impossible not to compare how millennials grew up and how our children are growing up. I grew up in the '90s. I spent a ridiculous amount of time playing outside. The only rules were that my homework had to be done, dinner eaten, and I had to be in before the street lights turned on. I can't imagine being able to parent this way. I live in Brooklyn, where the idea of allowing my 10-year-old and my 6-year-old out to wander the streets gives me a panic attack and has me wrapping them in cotton wool. I do my best to get them out as much as possible, but the parks get crowded, the wifi is spotty, and it can be really hard.

(Not to mention the fact that half the time my kids would rather play on their iPads than do anything else, which is a topic for a different article.)

Science hasn't been shy about excoriating the lack of play both in and out of schools. The AAP wrote that "multiple forces are interacting to effectively reduce many children’s ability to reap the benefits of play. As we strive to create the optimal developmental milieu for children, it remains imperative that play be included along with academic and social-enrichment opportunities and that safe environments be made available to all children."

And it's not just how much playtime a child needs. No, the type of play and encouragement to do so is paramount. According to Dr. Whitehead, there are several different modes of play from playing outside, to games with rules, to imaginative play, and they all build upon one another to create the fertile garden of learning that playtime feeds. For instance, his argument that there are keen differences between traditional imaginative play, like that of playing house (or in my home, the Sith versus the Jedi), and the type of imaginative play you see children engaging in alone, are fueling different places in their brain. He wrote, "Although each type of play has a main developmental function or focus, arguably all of them support aspects of physical, intellectual and social-emotional growth. From all the available evidence, a balance of experience of each of these types of play is likely to be beneficial to children’s development."

For their part, the AAP agrees, noting, "It is through play that children at a very early age engage and interact in the world around them. Play allows children to create and explore a world they can master, conquering their fears while practicing adult roles, sometimes in conjunction with other children or adult caregivers."

Kids need the time to build these worlds in their minds and stretch their legs under the sun. They need to play tag and kickball so that they learn to follow the rules. They need us to guide them on adventures and keep them safe.

And those adventures? It turns out it does matter where it happens. According to the National Association for the Education of Young Children, there needs to be a balance between indoor and outdoor play, as they serve different roles in a child's development. The website noted, "Integrated whole child approaches, indoor and outdoor playful learning, built and natural playgrounds, and hands-on projects must keep pointing the way to healthy and happy child development." In short, you need the art projects and games of Connect Four as well as the time spent jumping in muddy puddles and chasing the ducks on the side of the pond. They're equally important modes of development in kids.

So the next time you go to charge your child's iPad, or enable the wifi for the day, maybe take a moment to reconsider. I'm not saying there's no place in childhood for passive entertainment (we'd all be lost without it), but the studies have formed a consensus — it should not be the primary element of play for a developing child. Might I suggest a rousing game of red light green light? I know it allows me to catch up with my kids, so it might also work for you.