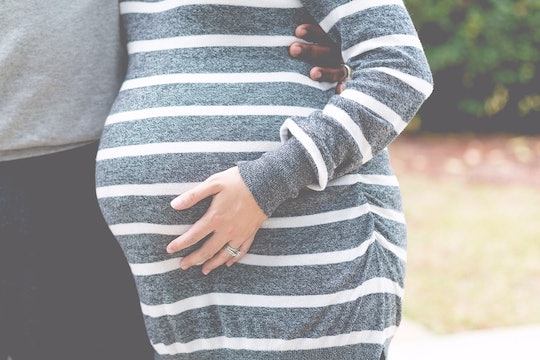 How Much Pregnancy Will Cost Under The New GOP Health Bill

After many weeks of being in the dark, Americans finally got a look at the GOP’s updated plan to repeal and replace the Affordable Care Act, or Obamacare. And one section of the Senate's divisive legislation — now dubbed the Better Care Reconciliation Act — in particular is on the chopping block: Women’s health care, specifically the costs associated with maternity care, pregnancy, and childbirth. Under the new health care bill, the cost of pregnancy and other standard services typically covered by health insurance will undoubtedly be more expensive — especially for those who need financial assistance the most.

Because the bill dramatically cuts Medicaid — which covers half of all births in the United States, according to Vox — and would defund Planned Parenthood for one year, pregnant women will likely be hit with heftier premiums or higher out-of-pocket costs should this bill pass. This is because the new bill would allow states to opt out of Obamacare’s essential health benefits requirement, which include pregnancy and childbirth. Vox reported:

Under these requirements, a state could ask for a waiver to allow insurers to [no] longer cover things like maternity care or mental health services — two things that individual plans often left out before the Affordable Care Act mandates. They would not be bound by the current Affordable Care Act requirement that coverage under these waivers be just as generous as the standard plans.

If a state is granted the waiver, it's expected that insurers will offer "skimpier coverage" on the state's insurance market that "would have cheaper premiums but higher out-of-pocket costs," according to Business Insider.

In a situation where a state does this, expectant moms can purchase a “rider,” which is an amendment to an insurance policy to cover additional benefits at an extra cost, according to Time. In the case of a pregnancy add-on, for instance, the CBO previously foresaw it costing expectant mothers more than $1,000 extra per month, in addition to the premiums they pay for their policies already.

Even before these changes, the average pregnancy and delivery could cost more than $3,000 out-of-pocket even with private insurance, according to Slate.

The Center for American Progress previously reported that a completed pregnancy, with no or minor complications, would result in an overall premium hike of at least $17,060 — or a 425 percent increase — under the ACHA.

The CBO has yet to analyze the Senate bill and will reportedly release its findings early next week, but some fear it's too similar to the House version and not much will improve.

In another tweet, he wrote: "Under the Senate bill, low-income people would pay higher premiums for bigger deductibles," Levitt said.

By cutting Medicaid, defunding Planned Parenthood, and allowing states to offer what could be subpar health care coverage with expensive add-ons for essential benefits, access to quality and affordable health care will surely take a hit. And pregnant women and their families could feel the brunt of it while they pay thousands extra for maternity care.

It doesn’t help that the United States has some of the worst maternal health and mortality outcomes in the developed world as it is, so it's understandable that many are concerned that the GOP's latest bill could create a much more problematic situation.