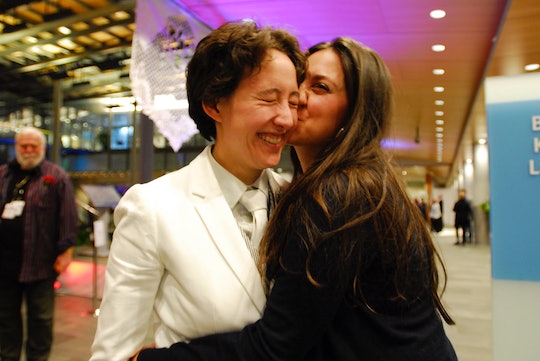 How Much Sex Should You Have When You're Married? And 4 Other Surprising Facts About Getting It On While Hitched

We’ve all heard the advice from so-called relationship experts that the key to happiness in a marriage or long-term relationship is to have lots of sex. Like, as much as possible. Every single day even, according to some particular overachievers. But, for those of us who heard that, then looked at our kids, never-ending laundry piles, and the beds that we’d much rather sleep in and then thought, “Yeah right, Relationship Experts!,” good news has arrived: according to huge study out of the University of Toronto-Mississauga, the ideal frequency for married sex is actually once a week.

According to the study, which was published online by the Society for Personality and Social Psychology, regular sex is absolutely important to the health of a relationship, but more isn’t always better. Researchers surveyed over 30,000 Americans for four decades, and found that couples who have less sex than once a week were reported to be less happy in their relationships, but couples who have sex more than once a week weren’t any happier than their once-a-week counterparts. According to lead researcher Amy Muise, “[the] findings suggest that it’s important to maintain an intimate connection with your partner, but you don’t need to have sex everyday as long as you’re maintaining that connection.”

University of Toronto-Mississauga researchers, tired co-parents everywhere thank you. Here are some other surprising facts about married sex that science just illuminated for us: