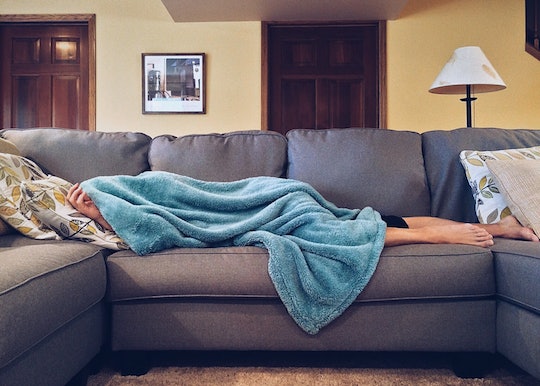 How Much Sleep Should You Get While Pregnant?

In my opinion as a mom, no amount of sleep is ever enough. Sleeping after having kids becomes more of a luxury than a right, so getting as much of it as you can while you are pregnant is a good idea. Guidelines for adult sleep are generally outlined, but how much sleep should you get during pregnancy?

According to the National Institute of Child Health and Human Development, pregnant women may need a few hours of extra sleep at night or some short naps during the day compared to women who aren't pregnant. (I mean, making a baby is hard work.)

Pregnant women might need more sleep because their pregnancy, and changing body, can make them feel sleepier than usual. The National Sleep Foundation explained that during the first and third trimesters, pregnant women can feel fatigued due to their increased progesterone levels and the physical demands of their pregnancy, while the second trimester is easier because of their rise in energy levels.

Sleeping during pregnancy is not always easy though, despite the exhaustion. According to a poll led by the National Sleep Foundation, 78 percent of women reported more sleep issues while pregnant versus when they weren't pregnant. The Mayo Clinic explained that a pregnant woman's sleep suffers because of things like heartburn, nausea or morning sickness, anxiety, back pain, frequent urination caused by the rise in progesterone, leg cramps, and shortness of breath.

The Mayo Clinic suggested that in order to get better sleep, pregnant women can try to maintain a regular sleep routine, position themselves comfortably (preferably on their left side), stay hydrated, sleep in a dark room, and use relaxation methods like breathing or yoga.

If you are pregnant, you should take cues from your body, so if you're sleepy, try to sleep. Just remember that sleeping will become a treasured commodity once your baby arrives, so you should get as much of it as you can, while it's still within reach.