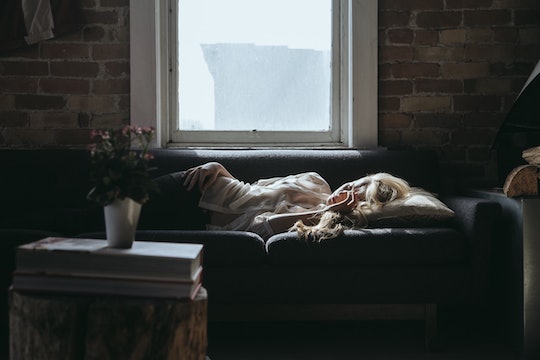 When there's a newborn in the house, sleep deprivation is real. And unless you're a bar or have some serious super powers, it can be tough for new parents to adjust to spending so much time awake at night — especially when sleeping in the next day is not an option. Right now, you may be willing to do just about anything to catch a few extra Zs. While your snoozing sessions are few and far between, you may be wondering just how much sleep you actually need in your first 9 months postpartum.

According to The National Sleep Foundation, the average adult should get between 7 and 9 hours of sleep each night. But for new moms and dads, this is rarely a reality. As FitPregnancy.com pointed out, a mere 5 percent of parents with children under six months sleep 8 hours straight. An article in Parents referenced a study by the National Sleep Foundation which found that 76 percent of parents have frequent sleep problems.

One of the things that makes sleep so tough for new parents are the frequent night wakings for feedings and diaper changes. As Parents mentioned, waking up two or three times during the night for 20 minutes is more difficult than five hours of straight sleep, because your body needs to restart the sleep cycle every time you go back to bed. As a result, you get less of the deep sleep you need to feel fully rested.

Besides making you cranky, this lack of sleep can have some serious consequences. As WebMD mentioned, impaired concentration, forgetfulness, and anxiety are just a few of the ways chronic lack of sleep can affect you.

While things can be tough in the beginning, as your baby approaches 9 months, you should get a little relief. According to The Baby Sleep Site, by around 9 months, most babies are capable of sleeping through the night without a feeding. But as with everything parenting related, just when you think you've got things under control, things change. Between 8 and 10 months, some babies experience a period of sleep regression due to development and separation anxiety, as The Baby Sleep Site pointed out.

Until that magic moment when you and your baby are sleeping peacefully through the night, you are going to have to use a little creativity to get as close to your 40 winks as possible. As Parents suggested, it can help to delegate chores, rest during baby's naps, and pump milk to allow others to help with feedings.