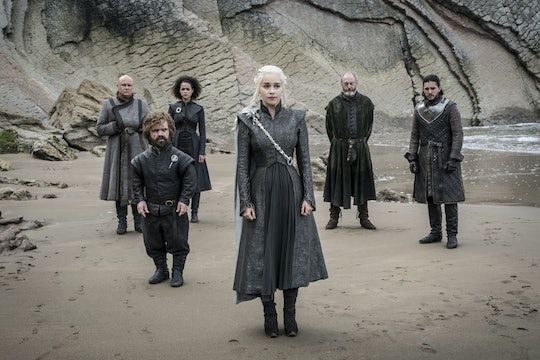 The One Question That Has 'Game Of Thrones' Fans Stumped

Game of Thrones has been known for its rather ponderous exposition episodes, where everyone spends a great deal of time talking about potential moves, explaining backstories, and deciding what to do next. Season 7, however, is moving quite a bit more quickly. So how much time as passed on Game of Thrones Season 7? With everyone getting together so fast, it's honestly pretty difficult to tell.

In Episode 1, it looks as though Cersei's hair has not grown at all, and Jon Snow is just now deciding his first moves when it comes to defeating the White Walkers and the Night King as King in the North. This seems to imply that we are picking right up where Season 6 ended with hardly any time having passed at all. However, we also see that Daenerys land at Dragonstone, where about a day ago she was just setting off with her fleet. Perhaps Jon spent several weeks combing his hair and getting used to being king before addressing his people, which seems unlikely. Or perhaps Daenerys has the world's fastest ships and it only takes a day to get across the Narrow Sea. I don't know the exact width in miles of the Narrow Sea, but if it were truly that small surely someone would have crossed it before now, right?

But the puzzling time jumps don't end there. In the second episode, Daenerys sent her doomed fleet to Dorne and a raven to Winterfell summoning Jon Snow. Jon received the raven immediately and in the very next episode he was actually at Dragonstone just as Dany was receiving the news that her Ironborn fleet was destroyed by Euron's Ironborn fleet. Looking at a map of Westeros, Dragonstone is very far south in relation to Winterfell. This implies that Jon must also have magic ships, because he sailed to Dragonstone in the same time it takes a bird to fly there: a day.

My other question about timing relates to Cersei's hair. Cersei had all of her hair cut off at the end of Season 5. A year later, she is still rocking this jagged pixie cut, as if it hasn't grown at all. Perhaps this means that less time has passed since the end of Season 5 than was originally thought, in which case Daenerys landed in the middle of nowhere with Drogon, was captured by Dothraki, escaped the Dothraki and won their alliegance, assembled her crack team of advisors, and sailed to Westeros in a matter of weeks. Or perhaps Cersei is starting a new trend for women and keeps her hair short on purpose. (Her maid was rocking the same pixie cut in Episode 3, so maybe!)

One explanation for all this lightning travel is that we're perhaps not seeing everything quite as linearly as it appears. Most likely weeks or months pass by without us seeing it. Jaime's travels to Highgarden probably took weeks, the showrunners just spared us having to watch the long and boring journey. If this is indeed the case, I'd say a few months have passed in the first three episodes of the the season and we're just seeing the highlights.

But even if it doesn't all seem to add up nice and neatly, I get that the writers are trying to cram a lot on content into a much shorter amount of time, so I guess we're just going to have to roll with it and let the inconsistencies go. But that doesn't mean I can't have a little fun trying to explain it all.