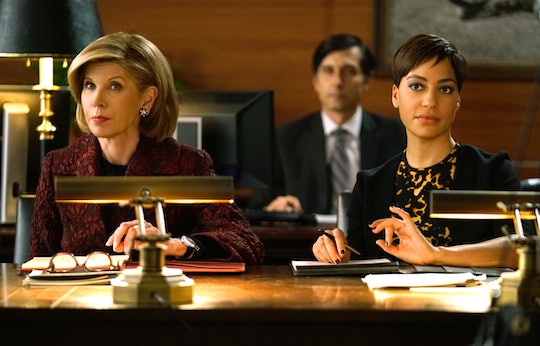 'The Good Fight' Will Introduce A Time Jump

CBS is resurrecting its multi-Emmy-Award-winning series The Good Wife via a CBS All Access spin-off called The Good Fight. It follows Christine Baranski's character, Diane Lockhart, as she navigates a financial disaster that interrupts her plan for retirement, forcing her to find a new job at another law firm. The series also stars Cush Jumbo, who returns as Luca Quinn, and newcomer Rose Leslie, who plays Diane's goddaughter Maia, a newly minted lawyer whose father was behind the Ponzi scheme that drained Diane's savings. So how much time passed between The Good Wife and The Good Fight? According to Variety, Diane's story picks up a year after The Good Wife finale, which aired in May of 2016.

Although The Good Fight premieres Feb. 19, it was originally slated for a premiere this May, which would have coincided with the show's timeline. However, CBS had to move the premiere date up to accommodate the postponement of Star Trek: Discovery. Unlike The Good Wife, The Good Fight will stream exclusively on CBS All Access, after the series premiere airs on TV. This is CBS' first attempt at putting a scripted show behind its online streaming service paywall, but it won't work exactly like its competitors on Amazon or Netflix. Instead of releasing the whole season at once, CBS All Access will release The Good Fight's 10 episodes one by one on a weekly basis, just like its network shows. Whether or not fans of The Good Wife will shell out just to watch its spin-off remains to be seen, but, based on the trailer, The Good Fight does appear to boast a similarly high production value.

The series opens with Diane on the cusp of retirement from her old law firm, but just as the ink is dry on her contract buying her out of the firm, she learns that all her retirement money has been lost in a Ponzi scheme run by her close friend and financial advisor Henry Rindell. Henry's daughter Maia has just been hired by Diane's law firm, but she ends up a pariah after her father's arrest. Upon realizing she has no money to support herself, Diane tries to get her old job back, but the partners refuse (led by — who else? — David Lee). She and Maia end up turning to Luca for jobs and the three of them team up as coworkers. Sarah Steele's character, Marissa Gold, also returns to the series as Diane's secretary, but eventually comes into her own as an investigator.

It's an interesting premise, but with The Good Fight as CBS All Access' only exclusive scripted content, it makes the membership a tough sell. We'll have to wait and see whether it pays off.