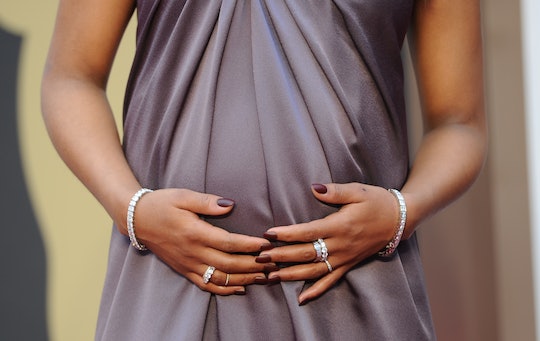 Heads Up, Pregnancy Could Cost Thousands More Under Trumpcare 3.0

Have you heard anything about the Graham-Cassidy bill? If you haven't, well, I regret to inform you that the Republicans are at it again. And by "it," I mean repealing the Affordable Care Act, also known as Obamacare. This newest legislation would result in cuts to Medicaid and lead to at least 32 million fewer people having coverage after the year 2026. So, it sounds a whole lot like other versions of "Trumpcare" that have been floated over the past several months. In particular, premiums for pregnancy would jump enormously under the Graham-Cassidy bill. Just how much will pregnancy cost under the new health care bill, exactly? Get ready to pay thousands more, everybody.

The Center for American Progress, "an independent nonpartisan policy institute," reported that the bill could lead to tremendous premium increases for anyone with pre-existing conditions. Does that sound familiar? It probably does, because this bill wouldn't be the first attempt by Republicans to develop a health care plan that would ultimately lead to higher costs for those with pre-existing conditions. The party and the Trump administration have actually tried a few times since President Donald Trump took office in January 2017 to repeal Obamacare, and every time, the proposed plans would have led to a loss of coverage for many, and higher costs for a lot of people as well.

But what about pregnancy? Are pregnancy, maternity care, and newborn care covered under the Graham-Cassidy bill, as it's currently drafted? No, of course not, because it's not like those are important health conditions to cover, especially considering that care was considered an "essential health benefit" under Obamacare.

To put things into perspective, insurers would charge about $17,320 more per year in premiums for pregnancy under the new Graham-Cassidy ACA repeal bill, according to the Center for American Progress. Pregnancy could literally cost thousands of dollars more under this bill, all thanks to premium surcharges. That number would seem a little more ridiculous, if other, similar health care bill projections for pregnancy costs from other ACA repeal offerings hadn't already desensitized me a little bit, to be honest.

Insurers would also not have to provide certain essential care services under the Graham-Cassidy bill, including pregnancy, maternity, and newborn care (before and after birth), according to Forbes. Under Obamacare, insurers were required to include maternity coverage in all plans for the first time.

In addition, insurers wouldn't have to cover birth control, which could help women not get pregnant in the first place, and the current ban against lifetime limits on benefits would no longer be in place, Forbes reported. That would be devastating for premature babies, and for the families who have to pay for their crucial care.

A Trump administration official has already said the president would sign the Graham-Cassidy bill if the legislation to repeal Obamacare makes it to him, according to CNN. So the administration is apparently just fine with increasing premiums on pregnancy, and with leaving people who have the potential to become pregnant, as well as vulnerable newborns, without the ability to have essential health care covered by their insurance. This, from an administration that claims to be "pro-life" — apparently in name only.

But what can you do about the Graham-Cassidy bill? Contact your elected officials, and urge them to oppose the Graham-Cassidy bill. I know, I know. You're probably getting pretty tired of calling them up, since it seems like there's a new issue to contact them about every week. But this issue is a critical one, and because those reps answer to you, they need to hear from you about this bill sooner rather than later.

If you're concerned by this latest effort to repeal Obamacare, especially in light of the increased costs for pregnancy under the Graham-Cassidy bill, just know that there are still actions you can take to keep the legislation from becoming a reality.