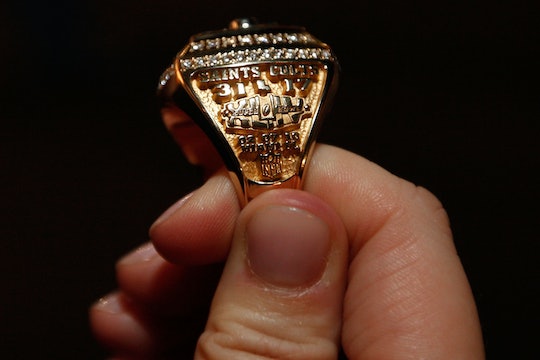 How Much Will The 2019 Super Bowl Ring Cost? Its Price Tag Could Be Pretty High

Along with the glory and fame that comes with winning the Super Bowl, NFL players also get to go home with a snazzy piece of bling on their fingers. Each year, the winning team designs for themselves a ring that represents their road to victory and celebrates their win, and these rings are flashy. So what’s in store this year, and how much will the 2019 Super Bowl ring cost?

The fact is that we don’t know much about this year’s ring quite yet, since it is designed by the winning team after the game, but we can look to previous years to get an idea of the price range. First off, the NFL doesn’t foot the whole bill for these mementos. According to The Christian Science Monitor, the NFL contributes up to $5,000 per ring for up to 150 rings for the winning team; anything beyond that cost falls to the team to cover.

As the years go on though, how much NFL put towards the rings buys less bang for the buck each year. When the tradition was started, back in 1967, the price of gold was $34 per ounce, according to The Christian Science Monitor, but these days it can be upward of $1,900 an ounce. Ouch.

The first Super Bowl ring was handed out to the Green Bay Packers and it featured a one-carat diamond, according to CNN. The most recent edition, awarded to the 2018 champion Philadelphia Eagles boasted 2019 diamonds and 17 green sapphires in a white gold ring, as CNN reported.

The process of designing the ring is much more intricate than it was years ago. As Eagle’s CEO Jeffrey Lurie told Forbes, while he originally thought you just come up with a design for the ring and throw a big bash to hand them out, the actual reality was much different. “You go through so much during a season. What, when you’re looking back 20 years from now, do you want to have signified with that ring? What are the statements you want to make about the team, about the coaches, about the season…?”

In 2017, the New England Patriots included 283 diamonds on their championship ring to commemorate their comeback from a 28-3 deficit to with the game, according to ESPN.

Though the actual cost of the ring is generally kept secret, ESPN reported that the Patriots' 2015 ring cost $36,500. At the time, they were the most expensive Super Bowl ring ever made by Jostens, the company so many of us are familiar with from our high school and college ring days. And there are a lot of them floating around out there. A representative from Jostens told CNN that between 300 and 900 rings are usually made, depending on how many people the team decides to give them to. They generally award them to everyone on the team staff, often including front office people, as well as former players sometimes.

When someone decides to sell their ring is when the big money often comes in. One ring given to a member of Tom Brady’s family sold at auction for $344,927, as CNN reported. A New York Giants' ring sold in 2012 for $230,401. In my neck of the woods that would buy you a pretty decent house.

With the Patriots looking to tie the Steelers record for most Super Bowl wins this year, the 2019 ring could be pretty impressive, no matter who ends up wearing it. Tune in Sunday, Feb. 3, when we’ll all find out whose fingers will be a little heavier after this year.